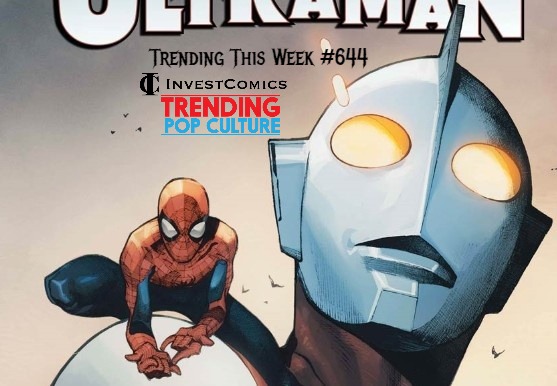 InvestComics/Trending Pop Culture; SINCE 2005.
Here are this week’s top Trending Comics, Best Cover Art, and Trending Collectibles headed your way this Wednesday 9-9-20
Click on the RED links, Images or the comic cover to buy/bid from All available sellers on Ebay
Please note: New comic book releases and all items are subject to change

Wonder Woman #762 – DC Comics will introduce two new characters in two of their flagship titles. And both of the new characters will grace their very own variant cover. What this means is that if the absurd speculation begins on either of these newbie’s, the solo cover variants will be the ones to nab. New character Liar Liar makes her debut here. Funny, doesn’t look like much of a threat on the cover, must be a complete psycho!
Superman #25 – A new creation from the mind of writer Brian Micheal Bendis. The first appearance of Synmar. DC’s version of Venom? We’ll see. Synmar also graces a solo variant cover.
Web Of Venom Wraith #1 – It’s Wraith vs, Knull. From fan-fave writer Donny Cates. Art by Guiu Villanova.
Ultraman Rise Of Ultraman #1 – The Marvel Comics debut of Ultraman. This character first appeared in comic book format in Ultraman #1 from Ultra Comics publishing back in 1993. An American publisher (we think). A Japanese comic format book proceeds the American comic by a year. The best part of the poly-bagged (ah, the 90’s were so wonderful) Ultraman #1 comic from 1993 is that it’s available right now on eBay for $4.99. If the expert speculation sites, etc. decide to push Ultraman (for their own purpose), this $4.99 comic suddenly becomes a “key issue”. Every comic is a key these days though. Laughable really. The Marvel debut will be presented by writers Kyle Higgins and Mat Groom. Artists Francesco Manno and Michael Cho.

Nightwing #74 – The cover shows Nightwing battling everyone’s favorite (not so favorite/waning) villain Punchline. Does anyone still care about Punchline? Anyone? Hello? Anyway, the DC solicit mentions zero about Nightwing and Punchline doing battle. Kind of like the Knull virgin variant where he’s wearing the gauntlet and it has ZERO to do with the inside of the comic, yet people are paying hundreds and hundreds of dollars for it. Like that maybe? Probably not because they were fighting in the last issue, so it just gave an excuse to bring up that ridiculously overpriced Knull variant. Thanks guys!
Dark Nights Death Metal Trinity Crisis One Shot – The folks at DC Comics are really driving this Dark Nights thing to its limits. Seems every week there is another number one Metal issue. Not hating on it, so relax fanboy, breathe. A one-shot here with always the potential of a cameo or first appearance possible, so be on the lookout.
The Legion of Super Heroes #8 – A new Krypton is discovered. From the future mind of Brian Michael Bendis and artist Ryan Sook.
Cyberpunk 2077 Trauma Team #1 – A new video game adaption series from writer Cullen Bunn and artist Miguel Valderrama.
Bill & Ted Are Doomed #1 – Has anyone seen the new Bill & Ted movie? We’ll never get that hour and a half back. Probably the worse film Keanu Reeves has ever done in his career. The movie was God awful. We’re banking that with the amazingly talented writing skills of Evan Dorkin that this comic is 110 percent better than the movie. Art by Roger Langridge.