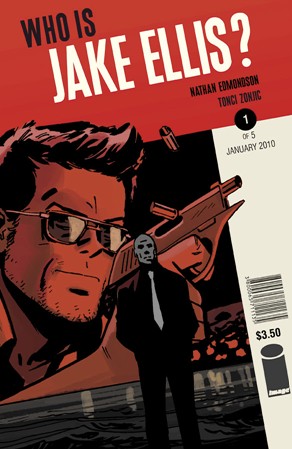 Berkeley, CA – 20 October 2010 – Writer Nathan Edmondson made people afraid to look into the light with THE LIGHT, a sell-out five-issue miniseries drawn by Brett Weldele (The Surrogates). Now, he brings new life to the spy genre with WHO IS JAKE ELLIS?, an all-new series from Image Comics.
The first issue of JAKE ELLIS will be in stores in January 2011. Tonci Zonjic (POPGUN, The Immortal Iron Fist, Daredevil) joins Edmondson on the book, producing action-packed art and covers for the series.
“Tonci and I are bringing the idea of psychological thriller to a whole new arena,” says Edmondson. “One part mystery, one part friendship, one part James Bond and Jason Bourne lovechild, and one other part sci-fi spy. You’ll be asking yourself the whole ride through — just who is Jake Ellis?”
Jon Moore is the most sought after spy-for-hire in Europe’s criminal world. This is because of Jake Ellis, a man who is invisible to everyone except Moore. When a deal goes bad, the only one who can protect Moore from Europe’s most dangerous criminals is Jake Ellis. No one but Moore can see Jake Ellis. But Jake Ellis can see everything.
WHO IS JAKE ELLIS? #1 (NOV100403), a 32-page, full-color comic book from Image Comics, will be in stores January 5, 2011, for $2.99. THE LIGHT VOL. 1 TP (OCT100471), a 140-page full-color graphic novel for $16.99, will be in stores December 15, 2010.
For the latest updates, follow Nathan Edmondson on Twitter, www.twitter.com/nhedmondson, and check out the Jake Ellis website at www.whoisjakeellis.com.
Image Comics is a comic book and graphic novel publisher founded in 1992 by a collective of best-selling artists. Image has since gone on to become one of the largest comics publishers in the United States. Image currently has five partners: Robert Kirkman, Erik Larsen, Todd McFarlane, Marc Silvestri and Jim Valentino. It consists of five major houses: Todd McFarlane Productions, Top Cow Productions, Shadowline, Skybound and Image Central. Image publishes comics and graphic novels in nearly every genre, sub-genre, and style imaginable. It offers science fiction, romance, horror, crime fiction, historical fiction, humor and more by the finest artists and writers working in the medium today. For more information, visit www.imagecomics.com.