“My dream since I took over the editorial duties on IDW’s Ghostbusters comics license was to bring the boys in proton packs to monthly comics,” said series editor Tom Waltz. “We’ve had fantastic Ghostbusters one-shots and mini-series up to this point, but the incredible success of Ghostbusters: Infestation has proven that Ghostbusters fans, old and new alike, are still very hungry for ghostbusting tales. With the awesome creative team we’ve gathered to make it happen, the best is yet to come!”

In this ongoing series, psychokinetic energy is on the rise again, and business is booming for the boys. Ray is troubled by what could be a prophetic dream—is this an ill omen of an upcoming apocaplypse, or just a little indigestion? These questions and more are raised in the first issue of the all-new GHOSTBUSTERS comic series. In addition, each issue will contain two pages of exclusive behind-the-scenes extras by creator Tristan Jones (Tales of the TMNT.)

IDW will offer special retailer incentive covers, including a “Who Ya Gonna call” cover by Schoening, and a glow-in-the-dark cover. Furthermore, as part of IDW’s “Be a Ghostbuster” promotion, retailers will have the opportunity to obtain a unique variant featuring up to four personalized Ghostbusters on their cover. Fans are encouraged to reach out to their retailers to learn more about these exclusive variant covers. 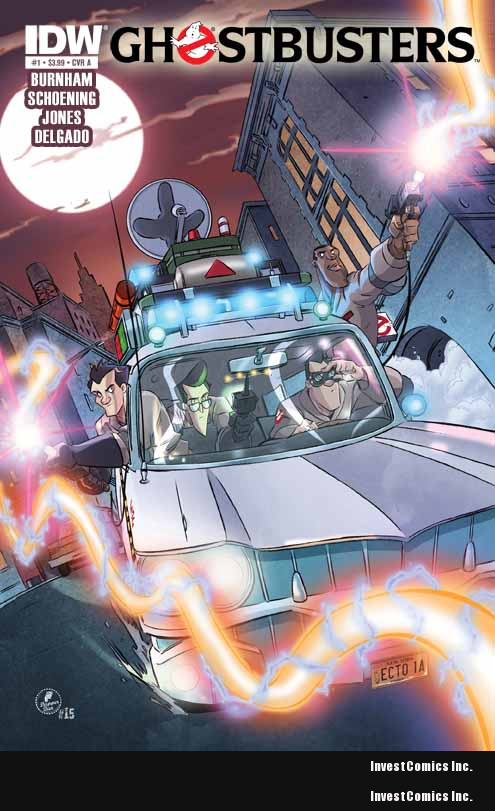 IDW is an award-winning publisher of comic books, graphic novels and trade paperbacks, based in San Diego, California. Renowned for its diverse catalog of licensed and independent titles, IDW publishes some of the most successful and popular titles in the industry, including: Hasbro’s The Transformers and G.I. JOE, Paramount’s Star Trek; HBO’s True Blood; the BBC’s DOCTOR WHO; Toho’s Godzilla; Sony’s Ghostbusters; and comics and trade collections based on novels by worldwide bestselling author, James Patterson. IDW is also home to the Library of American Comics imprint, which publishes classic comic reprints; Yoe! Books, a partnership with Yoe! Studio; and is the print publisher for EA Comics.