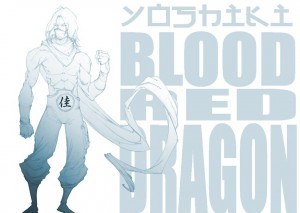 Blood Red Dragon Issue #0, the first in the series published by Todd
McFarlane Productions, focuses on the origin of an ancient and benevolent
force, locked in an epic battle with the dark armies of Oblivion. Creative
expression and destiny collide, as once in a generation an individual is
born with the potential to unlock the awesome might of the Blood Red Dragon,
thus channeling a power beyond comprehension and assuming the mantle of
Earth¹s protector. When agents of Oblivion discover that the key to
accessing the Blood Red Dragon¹s energy lays in music‹the melodic heart of
the human spirit, they launch a series of violent attacks on musicians
across the globe.  As he performs in front of a large crowd during the
opening show of a massive world tour, drummer and keyboardist Yoshiki comes
face-to-face with his destiny, experiencing a transformation that will
forever change his life‹and possibly the fate of the world.

³I am extremely excited about Blood Red Dragon,² said Lee. ³Yoshiki¹s
exceptional musical abilities, visual flair and passionate humanitarianism
make him an amazing and inspiring collaborator and I think readers will
experience every bit of that in the comics.²

Added Yoshiki, ³Working with the one-and-only Stan Lee has been an
incredible experience for me. He is truly a genius and one of the best
storytellers living today. I¹m excited with the results of our efforts and
look forward to the response from readers and music lovers around the
world.²

³Being able to collaborate with creators on a global level is always a
thrill,² said McFarlane.  ³Working with two big names, like Yoshiki and Stan
Lee, I hope I¹m able to add a little bit of my touch to a book that my,
Stan¹s, but most importantly Yoshiki¹s fans will enjoy.  At the same time, I
hope this book helps introduce Yoshiki to fans that don¹t know him on
American shores.²

Stan Lee is the founder, chairman and chief creative officer of POW!
Entertainment (OTCQB:POWN). Widely acknowledged as the originator of the
modern day superhero, Lee created or co-created the vast majority of Marvel®
Comics¹ most recognized and beloved characters including Spider-Man®, The
Incredible Hulk®, X-Men®, The Fantastic Four®, Iron Man® and countless
others. Lee first became publisher of Marvel Comics in 1972 and is presently
the chairman emeritus of Marvel Enterprises. In 1977, he introduced
³Spider-Man² as a syndicated newspaper strip that went on to become the most
successful of all syndicated adventure strips, appearing in more than 500
newspapers worldwide. More than 2 billion of his comic books have been
published in 75 countries and in 25 languages and numerous blockbuster
movies and dozens of successful television series have been based on
characters he created. Lee formed POW! (Purveyors of Wonder) Entertainment
with producer Gill Champion and attorney Arthur Lieberman. The company,
unrelated to Marvel, creates franchises for theatrical release, television,
DVD¹s, video games, merchandising and related ancillary markets.

The heart of X Japan is Yoshiki – songwriter, drummer, and classically
trained pianist who also plays guitar, bass and trumpet.  Yoshiki, who has
been referred to by his first name only throughout his entire professional
career, is arguably Asia’s most influential musical artist and biggest rock
icon.  According to one industry insider, “Yoshiki is to Japan what Bono is
to the UK.”  His double-record classical album, Eternal Melody (1993), was
co-produced and arranged by the legendary George Martin, recorded with the
London Philharmonic Orchestra, and remains Japan’s biggest-selling classical
release.  For KISS My Ass:  Classic KISS Regrooved, the 1994 KISS tribute
album, Yoshiki arranged and produced “Black Diamond” as a piano concerto,
prompting Rolling Stone magazine to comment in its CD review, “the ingenuity
award must go to Yoshiki…”  Yoshiki has produced some of Japan’s most
influential bands, including Dir En Grey and Glay.  At the request of the
Japanese government in 1999, Yoshiki composed a piano concerto and performed
it with a 77-piece orchestra to celebrate the tenth year of the Emperor of
Japan’s reign.  In 2005, he was named the Music Director for the 2005 World
Expo, composed its theme song, and conducted the orchestra at the opening
ceremonies. Yoshiki also wrote the X Japan song “I.V.” for the 2007
international blockbuster horror film “Saw IV,” which played over the film’s
closing credits.

Beyond music, Yoshiki is an entrepreneur and a true renaissance man.  He has
overseen the development of a premiere line of Yoshiki jewelry, collaborated
with the California Mondavi family to develop his own wine, “Y,² the Bank of
Japan has issued a Yoshiki Visa Card and, for the first time in history, a
Hello Kitty product line was named after a person – “Yoshikitty” – that
became available in Japan in May 2010. In March 2011, Yoshiki co-produced an
East-meets-west/fashion-meets-music event, ³Asia Girls Explosion,²
showcasing top fashion brands, and debuting his own line of kimonos,
³Yoshikimono.² U.S. celebrities such as rocker Marilyn Manson and stars from
the hit television series ³90210.² Yoshiki has graced the covers of more
than 200 music, business and trade media outlets in Asia.

In July, 2010, Yoshiki launched the Yoshiki Foundation America, a California
non-profit, 501(c) public benefit corporation that has already helped
organizations including The Grammy Foundation, Make-a-Wish, and St. Vincent
Meals on Wheels.  With the devastating March 2011 earthquake in Japan, YSA
is focusing all of its efforts on Japan relief, and has partnered with the
Japan America Society of Southern California in those efforts.

About Todd McFarlane
Grammy-and Emmy-winning producer/director Todd McFarlane became a true
comic book superstar in the 1980s as a result of his work on Marvel Comics¹
Spider-Man franchise. In 1992, he launched his own comic title, Spawn,
creating one of the most popular heroes of the 1990s. The title¹s hugely
popular 1992 debut sold an amazing 1.7 million copies ­ an unprecedented
feat in independent comics.

After garnishing prominent success in the comic industry, McFarlane founded
the international award-winning McFarlane Toys. Now one of America¹s top
action figure manufacturers, McFarlane Toys produces figures of HALO: Reach
as well as the officially licensed teams of the NFL, NBA, MLB and NHL.
McFarlane Toys has become a leader and redefined the standards within the
action figure industry.

The breadth of McFarlane¹s awards span from two Emmy Awards, a pair of MTV
Video Music Awards, and a Grammy Award, to hundreds of international awards
for his work in the arts and action figure industry. Todd McFarlane
Entertainment continues to develop projects in the video game, film,
television and music industries.

POW! Entertainment,Inc. (OTCQB: POWN), a multi-media and entertainment
company, was founded by noted comic book and entertainment figure Stan Lee,
together with award-winning producer Gill Champion and intellectual property
specialist Arthur Lieberman. POW!¹s principals have extensive backgrounds in
the entertainment industry encompassing the creation, production and
licensing of original intellectual properties, including some of the most
successful entertainment franchises of all time. POW! is capitalizing on
this combined expertise, specializing in creating and developing both the
legacy and digital media components of the entertainment industry. This
includes animation and live-action feature films, plus television, DVDs,
multi-media, merchandising and related ancillary markets, all of which
contribute to global expansion. POW! partners with other individuals and
entities of entertainment¹s top echelon, including studios and networks in
the creation, licensing and distribution of new POW! character franchises.
www.powentertainment.com
<http://us.lrd.yahoo.com/SIG=16n71h66s/**http%3A/cts.businesswire.com/ct/CT%
3Fid=smartlink%26url=http%3A%2F%2Fwww.powentertainment.com%26esheet=6456813%
26lan=en-US%26anchor=www.powentertainment.com%26index=3%26md5=8fcaa8327a31f6
0d891e11719040abfb> .

Todd McFarlane Productions (TMP) is the company behind the monthly comic
book Spawn. Created by Todd McFarlane, Spawn debuted in May 1992, selling
1.7 million copies, making it the best-selling independent comic book of its
time. Spawn is published in nine languages and distributed in more than 32
countries. Now in its 20th year, the comic recently published its 208th
issue.