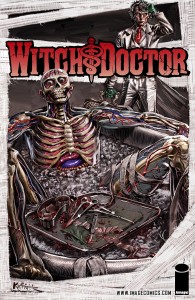 Berkeley, CA – 14 September 2011 – Robert Kirkman’s Skybound imprint at Image Comics
introduced WITCH DOCTOR earlier this year among showers of praise from critics,
prompting i09 to describe it as “eminently entertaining” and Fangoria to dub the
series “a superbly smart and riveting medical thriller.”

Much to fans’ delight at San Diego’s Comic-Con in July, newcomers Brandon Seifert
and Lukas Ketner announced that the summer’s medical horror smash hit will return
this December with a one shot tale of black magic and organ-swapping in the upcoming
WITCH DOCTOR: THE RESUSCITATION.

“I’ve got a huge list of story ideas for WITCH DOCTOR — and THE RESUSCITATION is one
I’ve been looking forward to doing for years,” said Seifert. “It’s fun and strange,
and it does the trick of being a good introduction to the series while also setting
the stage for our next storyline. And on top of that, Lukas gets to draw some really
awesome monsters and stuff, which is pretty much the point of doing this series!”

“We’re excited to expand on the first miniseries, and this story definitely hits
some new high notes,” added Ketner. “If you love reading about the supernatural as
much as I love drawing it, then you won’t want to miss this… or the rest of the
series!”

Offering a great jumping on point for new readers, WITCH DOCTOR: THE RESUSCITATION
will ask important questions of its readers. For instance, if you wake up in a
bathtub of ice with a surgical incision on your side, but the hospital says you’ve
still got two kidneys, where do you go for a second opinion? To the expert, Dr.
Vincent Morrow, WITCH DOCTOR, of course!
WITCH DOCTOR: THE RESUSCITATION, a 32-page full-color medical horror one shot comic
for $2.99, will be on sale in stores December 14 and will be available for order in
the upcoming October issue of Previews.

ABOUT ROBERT KIRKMAN
Robert Kirkman is a New York Times bestselling author known for being the cultural
zeitgeist of the comic book industry. Following the grassroots success of the
self-published BATTLE POPE (2000), Kirkman caught the eye of Image Comics founding
partner Erik Larsen. After several short-term projects (SUERPATRIOT and TECHJACKET),
he achieved superstar status in 2003 with INVINCIBLE and THE WALKING DEAD. During a
subsequent stint at Marvel Comics, he gained many new fans with the haunting and
hilarious Marvel Zombies. MTV translated Kirkman’s INVINCIBLE into a motion comic —
one of the first in a growing industry trend. Kirkman’s SKYBOUND imprint, under the
Image Comics umbrella, is committed to fostering up-and-coming talent in the
industry, and all acquisitions are hand-picked by Kirkman himself. Kirkman won the
2010 Eisner Award for Best Continuing Series for THE WALKING DEAD. AMC’s
interpretation of the comic has received glowing reviews from critics and fans
alike, and continues to garner the highest ratings for the network, making it a game
changer for groundbreaking television on cable. For more information about Skybound,
visit www.skybound.com.