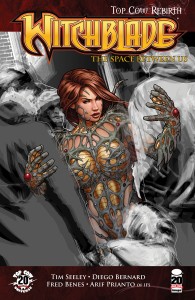 Image Comics and Top Cow Productions are excited to reveal to fans an innovative new promotion for fans — WITCHBLADE Cover Artifacts. Cover artist John Tyler Christopher’s stunning artwork has adorned the “A” covers of Witchblade since issue #151. Little did readers know, however, that Christopher hid a message in each of the covers!

The Top Cow Universe is full of secrets, myths and hidden mysteries and no title embodies that more than our flagship — WITCHBLADE! And now, thanks to cover artist John Tyler Christopher (ARTIFACTS, Voodoo), the mystery is no contained only within the story pages between the covers. Beginning with WITCHBLADE #151, each “A” cover contains hidden clues within the art. Find the “artifacts” hidden in each of the covers to solve a puzzle. Fans who solve each puzzle will be able to unlock exclusive downloads and bonus material by going to http://www.topcow.com/community/promotions and entering the solution. But be warned, these puzzles are challenging!

Top Cow has teamed up with Wired’s GeekDad blog to exclusively debut this promotion beginning Monday, May 21. To celebrate a “Week of Witchblade,” GeekDad will debut a new cover puzzle each day and also run a contest every day. Fans can not only unlock exclusive content at topcow.com, but also be eligible for a Daily Prize as well as a Grand Prize by entering at http://www.wired.com/geekdad/2012/05/a-week-of-witchblade-issue-151.

“One of the many reasons I love working with John is that, as an illustrator, he’s not only capable of producing some truly mesmerizing covers, but he’s always thinking outside the box,” said Top Cow Publisher FIlip Sablik. “The genesis of this idea really began with John’s desire to engage fans and give them more with every cover. And what better way to announce the project than on Wired, the best news source for innovation and technology?”

Fans can study each cover in depth both in the individual issues as well as the upcoming WITCHBLADE: Rebirth Volume 1 trade paperback, which collects WITCHBLADE #151-#155. The 144-page collection retails for $9.99 and is scheduled to be in stores June 6, 2012. WITCHBLADE #156 is in stores this week on May 23 and retails for $2.99. The stand-alone issue is the only one that does not feature a puzzle, and as a special bonus, fans will receive bonus downloads and behind-the-scenes material completely free on the WITCHBLADE Cover Artifacts homepage.