It was announced last month that ROBERT VENDITTI (SURROGATES, X-O MANOWAR, DEMON KNIGHTS) would be taking over GREEN LANTERN after Geoff Johns’ departure. Robert was kind enough to discuss this, and some other things, with InvestComics’ writer Sebastian Piccione.

InvestComics: Robert, when it was announced that you would not be writing CONSTANTINE, as originally planned, you said that your increased workload simply meant that something 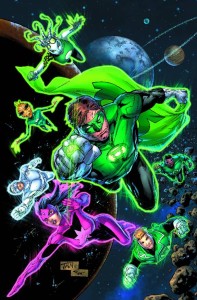 had to give. Was this part of that workload, or was this something that came along later, and you did some re-juggling?

ROBERT VENDITTI: Green Lantern was part of that workload.  My schedule got to a point where I had more books than I felt comfortable writing.  I’d already started on Demon Knights, so I wanted to stay with the title.  That left Constantine and Green Lantern, and after talking with DC, we all decided together Constantine was the one to let go.  I’m bummed not to get a chance to work on the character as I’d planned, but Jeff Lemire and Ray Fawkes will do a great job with him.

IC: And, c’mon, GREEN LANTERN? This is DC upper echelon stuff! And to follow Geoff “I put GL back on the map” Johns’ nine year run…what’s that like? How do you balance elation with pressure?

VENDITTI: It’s definitely exciting, and the project is much higher-profile than anything I’ve tried to date.  As far as comparing myself to those who’ve gone before, I try not to think about things in those terms.  I certainly don’t see myself as competing with Geoff.  How could I?  He contributed more to the Green Lantern mythology than I could ever hope to.  I’m just going to tell the best stories I can, the way I know how to tell them. 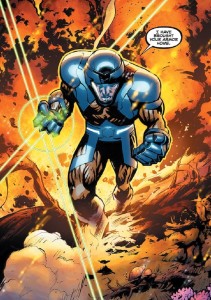 VENDITTI: I actually don’t see them as being very similar.  Aric of Dacia is a 4th Century Visigoth, and that background very much informs his approach to conflict resolution.  He’s the kind of guy who’ll punch a grenade into your chest and let it blow you up from the inside.  Hal Jordan is a modern-day test pilot, and with that comes the contemporary ethics developed by the evolution of weaponry and combat over the centuries.  If these two guys were to meet, I think they’d see far more that differentiates them from each other than the one or two things they share.

IC: Will GREEN LANTERN be Hal in space, Hal on Earth or a combo thereof?

VENDITTI: It’ll be a combination of the two, but mostly Hal in space, especially at the outset of our run.  That just makes sense, given the events that will be unfolding prior to our first issue.

VENDITTI: If we do our jobs right, each book will stand on its own.  Readers will get a sense of the larger tapestry of the Green Lantern line by reading all of them, though.  There will definitely be ties binding the titles together, some of them more closely than others.

IC: How much interaction with the rest of The DCU can we expect?

VENDITTI: In the beginning, not very much, other than the obvious interconnectedness with the rest of the titles in the Green Lantern line.

IC: Aside from what we’ve discussed, and within the spoiler-free editorial constraints, what can you tell us about your plans for GREEN LANTERN?

VENDITTI: We’ll be building on elements set in place during Geoff’s run, but we’ll also be taking things in our own direction.  Our first story arc will be what I see as a logical extension of the Green Lantern mythology.  And it’ll also force Hal to confront challenges he hasn’t had to deal with before.  Challenges that run opposite to who he is as a character. 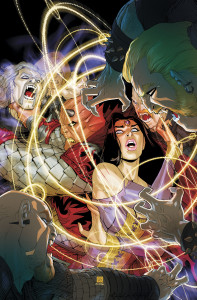 IC: Will you still be working on DEMON KNIGHTS, and if so, what can you tell us about Etrigan and the gang?

VENDITTI: I will still be writing Demon Knights.  We have some big plans in store over there.  After the current arc finishes up, we’ll be taking the team on another adventure that will put them up against a very insidious enemy.  Vandal Savage, Jason Blood, Ystin, and Exoristos will all play an important role in the story, and there will be big moments for the rest of the cast as well.

IC: And finally, Robert as you and I have discussed before, I’ve been living your Plan B for a while now…so, are you ready to switch? You can have my students and I’ll write some comics?

VENDITTI: Actually, I’d love to teach, but I’d like to keep writing comics as well, so it’d be kind of a combo thing.  Not sure if that’s the deal you’re looking for!

IC: Robert, you can guest lecture to my students anytime you’re back in ol’ Brevard!  Thanks for talking with us!