New York, NY—May 10th, 2012— This August, superstar writer Jonathan Hickman is joined by fan-favorite artist Mike Deodato to pit the Illuminati against their biggest threat yet  inNew Avengers #9! Tying into the blockbuster event of the summer, Infinity,New Avengers #9 shows fans what new threats lie beyond the edges of the Marvel Universe!

With the Avengers fending off an intergalactic threat on the edges of the Marvel Universe,Earth becomes the most vulnerable planet in the system! Enter Thanos, the galaxy’s most ruthless threat and an unparalleled force of brutality who brings order to the chaos of life through murder. Earth’s last hope may lie in the hands of a man who can level cities with a single whisper – Black Bolt, king of the Inhumans. But is the combined might of the clandestine group of Avengers enough to push back Thanos and his deadly group of lieutenants – the Cull Obsidian?

“As with Avengers, Jonathan’s issues ofNew Avengers are a critical part of the overall Infinity story. There are elements that were set into place in the earliest issues of the series that he and Deo will be paying off on here.” explained Executive Editor, Tom Brevoort, Marvel Entertainment. “You could maybe enjoy INFINITY without them, but you’re really not going to want to.”

Every issue of New Avengers includes a code for a free digital copy of that same comic on the Marvel Comics app for iOS and Android devices. Additionally, each issue of New Avengers features special augmented reality content available exclusive through theMarvel AR app – including cover recaps, behind the scenes features and more that add value to your reading experience at no additional cost.

This August, the intensity ofInfinity is turned up a notch as Hickman and Deodato show the power of the Mad Titan inNew Avengers #9!

Join the conversation on Twitter with hash tag#MarvelINFINITY, and don’t forget to follow us at @Marvel [www.twitter.com/Marvel]! 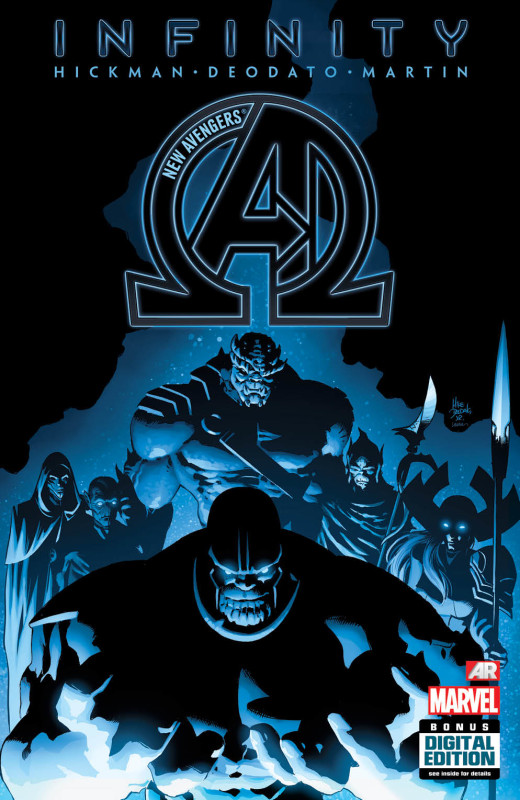