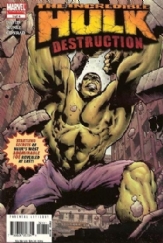 One of Hulk best foes is coming to the big screen in 2008. Abomination will be the one to give the Hulk a hard time this time around. (For more on this movie and Abomination, see our Blue Chip Market section). This issue was written by Peter David and contains the origin of Abomination. The big reason to get this issue would simply be to have the Abomination’s origin without putting down $70 to get it. Will this issue bring more money to your pocket? That all depends on how well the movie does and how well you market your book on EBAY. So make sure you put your marketing skills in motion and sell.