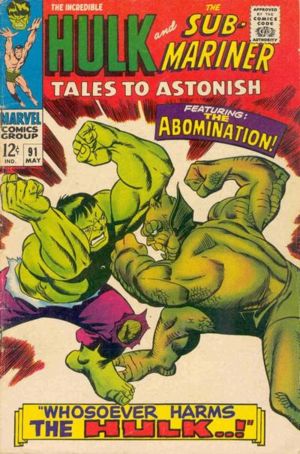 Get the cameo and 1st appearance of Abomination

The “new” Hulk movie is coming out in 2008. With the Hollywood stars just lining up, EdwardNorton (Hulk), Liv Tyler (Betty Ross) and Tim Roth (Abomination). This almost sure to beblockbuster (this time around) will be focused on our villain Abomination. Abomination has been in Hulks rouge gallery for quite sometime. While a great villain, he sometimes is overlooked. Until now….. Tales to Astonish #90 is our first look at the “other” green goliath. Issue #91 is our first full appearance of the big guy. That cover to #91 rocks! So, here’s the deal, (analogy time!) which would you rather have Incredible Hulk #180 or #181? Not saying this will be the same deal here but you never know. At a measly $60.00 price tags for these, it just seems like this months no brainier! With the star power of the new movie, these books are going no place but upwards in price value. Have we mentioned how much the cover to #91 rocks!