Here we analyze growth of the most valuable key issue Silver Age comics and prove the point with statistics. 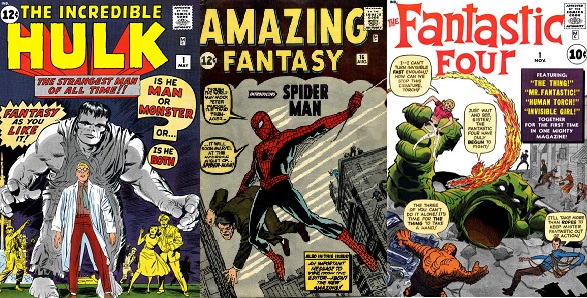 The most valuable comic book of the last 70 years !

Strong steady growth the past few years – will it keep going !

With issue #15 (Aug. 1962) Amazing Adult Fantasy was retitled Amazing Fantasy. In numerous interviews Lee recalls how the title had been slated for cancellation, and that therefore, with nothing to lose, publisher Martin Goodman reluctantly agreed to allow him to introduce Spider-Man, a new kind ofsuperhero — one who would be a teenager, but not a sidekick, and one who would have everymandoubts, neuroses and money problems. Sales for Amazing Fantasy #15, however, actually proved to be one of Marvel’s highest at the time so the company installed Spider-Man into a series of his own.

This version of the history is problematic: it was seven months before the first issue of The Amazing Spider-Man arrived on newsstands to capitalize on the new character’s apparent popularity. Furthermore, Amazing Fantasy #15’s message from the editor about “the new Amazing”, (advertised in a blurb on the front cover), in fact pertains to that issue’s deletion of the word “Adult” from the title of the series. The editor’s message explains the reasons for the new format and a new theme or direction promised for the series, which was evidently supposed to continue as Amazing Fantasy. Likewise, Lee’s parting text on the final page of the published origin story actually urges readers, “Be sure to see the next issue of Amazing Fantasy — for the further amazing exploits of America’s most different new teen-age idol — Spiderman!” (one of several instances in the early days that even Lee forgot or omitted the hyphen in the character’s name).

There is no denying that in NM shape this books is the leader of books to invest in.

So how good of an investment are the lower grade copies.

This book has not always been jumping in value.  Believe it or not it was only as far back as 2004 that there was a market correction on this overpriced book and the book fell in value in all conditions low to high grade.  It would basically stall for another year in high grade but surprisingly moved up in low grade.

In more recent years the NM copies have been unstoppable in the Overstreet guide.

The #2 most valuable comic book of the last 60 years!

The Hulk is a fictional character, a comic book superhero appearing in publications by Marvel Comics. The character was created by Stan Leeand Jack Kirby, and first appeared in The Incredible Hulk #1 (May 1962). Throughout his comic book appearances, the Hulk is portrayed as a large green humanoid that possesses near limitless superhuman strength and great invulnerability, attributes that grow more potent the angrier he becomes. Hulk is the alter ego of Bruce Banner, a socially withdrawn and emotionally reserved physicist who physically transforms into the Hulk under emotional stress and other specific circumstances at will or against it; these involuntary transformations lead to many complications in Banner’s life. When transformed, the Hulk often acts as a disassociated separate personality that hates Banner.

All Marvel key early silver age books have had super strong years the past 4 years in a row ever since the USA stock market crashed.  Before that the book was making small steady increases every year.  The book is from 1962 just like Amazing Fantasy #15 and is debatedly a rarer book.

The first Marvel superhero comic of the silver age.

Apocryphal legend has it that in 1961, longtime magazine and comic book publisher Martin Goodman was playing golf with either Jack Liebowitzor Irwin Donenfeld of rival company DC Comics, then known as National Periodical Publications, and that the top executive bragged about DC’s success with the new superhero team the Justice League of America While film producer and comics historian Michael Uslan has debunked the particulars of that story, Goodman, a publishing trend-follower, aware of the JLA’s strong sales, did direct his comics editor,Stan Lee, to create a comic-book series about a team of superheroes. According to Lee, writing in 1974, “Martin mentioned that he had noticed one of the titles published by National Comics seemed to be selling better than most. It was a book called The Justice League of America and it was composed of a team of superheroes. … ‘If the Justice League is selling’, spoke he, ‘why don’t we put out a comic book that features a team of superheroes?’

Lee, who had served as editor-in-chief and art director of Marvel Comics and its predecessor companies, Timely Comics and Atlas Comics, for two decades, found that the medium had become creatively restrictive. Determined “to carve a real career for myself in the nowhere world of comic books, Lee concluded that, “For just this once, I would do the type of story I myself would enjoy reading…. And the characters would be the kind of characters I could personally relate to: they’d be flesh and blood, they’d have their faults and foibles, they’d be fallible and feisty, and — most important of all — inside their colorful, costumed booties they’d still have feet of clay.  Lee said he created a synopsis for the first Fantastic Four story that he gave to penciller Jack Kirby, who then drew the entire story. Kirby turned in his penciled art pages to Lee, who added dialogue and captions. This approach to creating comics, which became known as the “Marvel Method“, worked so well for Lee and Kirby that they used it from then on; the Marvel Method became standard for the company within a year.

This book used to be the most valuable at one point but has been surpaced by stronger interest in Spider-man and The Hulk.

It has shown the most consistent steady smaller growth year to year.

It has had a few small market corrections such as falling prices in VF in 2004.  In 2012 low grade prices fell and have stalled in the past couple years.

For many years this ranked as the most valuable comic book of the silver age and is considered by most to be the 1st comic that started the actual silver age of comics led by DC Comics.  Unfortunately there is no major motion picture starring The Flash to catapult the price and interest up on this book like the comparable key Marvel silver age issues.

So here are the most expensive books and the growth they have shown over the past decade.  Some books are showing bigger percent gains than others but that is no guarantee of what will happen in the future.  It would actually not be surprising if the roles and percentages change in the future.   Eventually the books that get “left behind” are the ones that do the best catching up !