Bomb Queen gets catty with the ladies in early 2011 releases 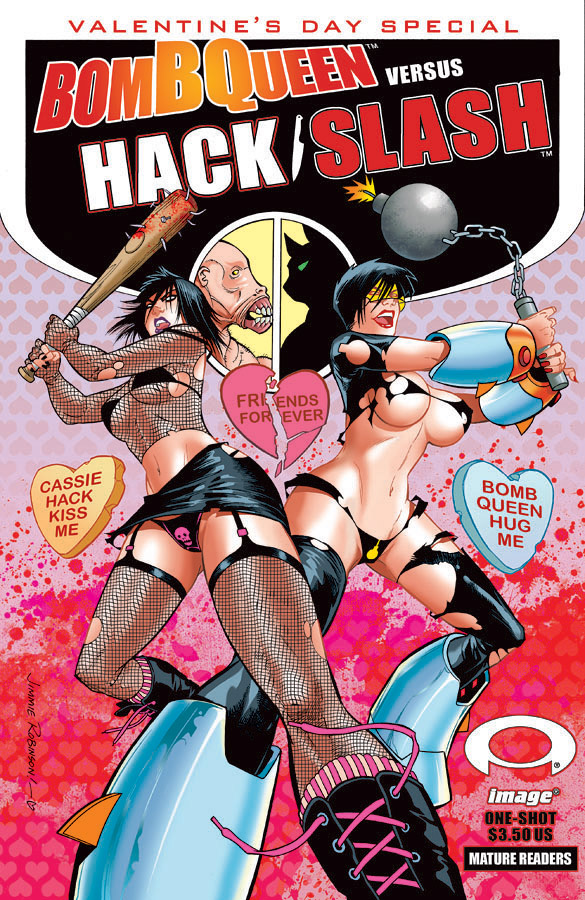 Berkeley, CA – 10 January 2010 – She’s currently fighting President Obama in the pages of BOMB QUEEN, Vol. VI, but in 2011, Bomb Queen will take girl fights to a whole new level when she takes on HACK/SLASH’s Cassie Hack and the Queen of England!
BOMB QUEEN VS. HACK/SLASH VALENTINE’S DAY SPECIAL, a one-shot from Bomb Queen creator Jimmie Robinson, hits shelves in February. In it, Tim Seeley’s HACK/SLASH heroine Cassie Hack must face down a horde of perverted slashers who have been released from Bomb Queen’s evil dimension into her unsuspecting world. Among those evil individuals? Bomb Queen herself!
In March, Robinson’s BOMB QUEEN ALL-GIRL SPECIAL #1 will see Bomb Queen waging war against the wider world when she travels to London to kill the Queen of England. But Bomb Queen better not underestimate Her Majesty, who has a few tricks of her own that may spell doom for Bomb Queen. There can be only one Queen!
“Barack Obama is a wuss compared to Cassie Hack and Queen Elizabeth,” says Robinson. “Bomb Queen has a real fight on her hands this time around!”
BOMB QUEEN VS. HACK SLASH VALENTINE’S DAY SPECIAL (DEC100437), a 32-page full-color one-shot from Shadowline and Image Comics, will be in stores February 9, 2011, for $3.50. BOMB QUEEN ALL-GIRL SPECIAL #1 (JAN110559), a 32-page full-color comic book from Shadowline and Image Comics, will be in stores March 9, 2011, for $3.50.
Image Comics is a comic book and graphic novel publisher founded in 1992 by a collective of best-selling artists. Image has since gone on to become one of the largest comics publishers in the United States. Image currently has five partners: Robert Kirkman, Erik Larsen, Todd McFarlane, Marc Silvestri and Jim Valentino. It consists of five major houses: Todd McFarlane Productions, Top Cow Productions, Shadowline, Skybound and Image Central. Image publishes comics and graphic novels in nearly every genre, sub-genre, and style imaginable. It offers science fiction, romance, horror, crime fiction, historical fiction, humor and more by the finest artists and writers working in the medium today. For more information, visit www.imagecomics.com.