With Valkyrie #1 coming out this week and the Thor push really coming on strong from Marvel, InvestComics brings you one of the most comprehensive Thor Investment list . Well some might be books to check out or nice additions to your collection. Not all of them are Gems, but there are some great buys within the list. Speaking of Valkyrie, she makes the Hot Picks List for the simple reason that it debuts the awesome writing talent in the Marvel Universe of Bryan J.L. Glass.

Since Valkyrie was the first thing spoken of in this article , you could find her first in Avengers #83. This very nice $90 book also has the first appearances of The Liberators.

So with Thor’s first appearance going back to 1962 in Journey Into Mystery #83 with a hefty $25,000 price tag on it, we begin our checklist of many, many Thor books to pick up, check out, and read. make your own judgement call on many of these.

Journey Into Mystery #83 – Well this is where it all began, already mentioned the hefty $25,000 price tag on this one, but with Thor finally coming to the movie screen, appearing in many Marvel titles, The Avengers movie, and most of all the children in all of the world will want a Thor hammer. Yes, Thor’s first appearance will be a buy right now. It has tremendous upside.

Journey Into Mystery #84 – Natalie Portman gets the role of Jane Foster, here is the first appearance of Jane. $3000 seems to be a bit much on a character that will never be a Lois Lane, or a Mary Jane.

Journey Into Mystery #85 – Where there is a hero, there is a villain brother. Thor’s main thorn in his side will be Loki in the film. This comic is a very good buy at $2000. Everyone loves a villain and if Loki transfers to the screen with the hate he displays so well in the comic books, this comic will be a winner. Actually, either way this comic is a winner at $2000. No downside to this book for a long term investment.  Wait one more reason to purchase this book, Heimdall’s first appearance here too!

Journey Into Mystery #86 – Well Thor and Loki have to have a daddy right? Odin’s first full appearance right here folks. Sir Anthony Hopkins does the honors of playing the father of the 2 rival siblings in the film. If you haven’t caught any of his movies, you should the man has some serious talent. That said, Odin’s first full appearance here doesn’t command that much money. You’re looking at only $1000. This comic has the slowest progression potential of the males in the family. Don’t look for this comic to really boost up in the rating’s that much. Buying this at $1000 will have you waiting quite a while before you see the slight upticks. Money should be spent on issue number 112, more on that in a bit.

Journey Into Mystery #99 – A 2 for 1 here, first appearances of Sutur and Mr.Hyde. $500 price tag. Not much upside here, but great Kirby cover…..as usual from The King.

Journey Into Mystery #102 – This issue features Thor’s first stalker, Sif. This is her first appearance. Have you seen Jaime Alexander? She’s playing Sif in the movie. Wow. Be nice to see her in a bad 2 hour move like Elektra. Staring at Jennifer Garner was so painful……not.

Journey Into Mystery #103 – Another 2 for 1 deal! This one is cheaper to buy, but a better one. This comic gives us a first look at the Executioner and Enchantress. At $400, more upside than issue #99, simple as that.

Journey Into Mystery #112 – Remember that $1000 you should hold on to? Well this comic would be a better pick up for the cash. Yes, not disputing that Odin’s first appearance wouldn’t be a welcome addition to any collection, but a Jack Kirby Thor vs. Hulk comic? This is a continuation of their first meeting in The Avengers #3 comic, Also from Jack Kirby. That one comes in at $1400. The two of these comics are no brainers at the going rate. Talk a dealer down at a show for $2000 for both if you can and you have gold. Big upside to these undervalued comics right now.

Rounding out the Journey Into Mystery comics, we get to issue #114, first Absorbing Man $200.Issue #115, which is an early origin issue of Loki for only $200. Issue #118, first Destroyer $200.
If you’re a fan of InvestComics, you’ve seen our first solo Thor checklist comic numerous times all over the site.

Thor #126, the classic Kirby cover from 1966 still till this day is one of the best Thor comic covers of all time. The only cover that rivals it in the Thor realm would the Silver Surfer #4 from John Buscema circa 1969 for $600. Awesome covers by 2 legends.

Thor #126 – Journey Into Mystery ended with issue #125, The Mighty Thor begins. This essentially is THE number one issue of Thor. A price of only $400 makes this extremely attractive. Probably the best 400 bucks you’ll spend on your collection lies right here. Do not pass this up…….or Silver Surfer #4.

Thor #129 – Introduces the more recent deceased Ares. Wait isn’t he back already? Don’t matter, $140 for this bad as* characters first appearance?? An absolute beauty here, buy it now. Forget any variant covers coming out for a few weeks, look for this instead.

Thor #165 – A very early first appearance of HIM/Warlock. If Marvel ever decides to explore the Cosmo’s in the movie theater, this would be a welcome addition to your collection. Speaking of Cosmo’s, look for a Marvel Cosmic list coming soon! Yes Marvel will eventually realize they have an entire universe that hasn’t gone to screen yet. So when it does, you’ll have you check list in order.

Thor #172 – If you’re looking to invest in the comic book market, the Bronze Age (early 70’s) books is a very good place to start. This issue of Thor is the first Bronze Age book in the run. The early Bronze Age books are becoming harder to find (scarceness/condition), and include some gems. Thor #172 cost only $60.

Thor #337 – If ever there was a comic that redefined a character and put them on the map, this comic would be it. One of the reasons a Thor movie is being made today is because of this comic from 1983. Yes that’s right, just like McFarlane’s Spider-Man, Miller’s Batman, this here is Walt Simonson putting the proverbial stamp on the Thor character. Thor #337 had the misfortune of being released in the 80’s when comics were overprinted, otherwise this once untouchable comic back in the 80’s would be a much higher priced commodity today. That said, any collector who calls himself/herself a comic book lover, should have this already. If you don’t, shame on you. The transformation of Thor as a character began here. Not only did Walt Simonson bring Thor to a new status quo in the Marvel Universe with this issue, he gave us the introduction of Beta ray Bill. This is the best $8 you’ll spend as far as reading and enjoyment when it comes to a Thor comic. Buy Walt’s run, it’s an amazing ride, great story telling, and a reintroduction of one of Marvel’s best characters. The very next issue #338 tells the origin of Beta Ray Bill. $16 gets you two excellent books. 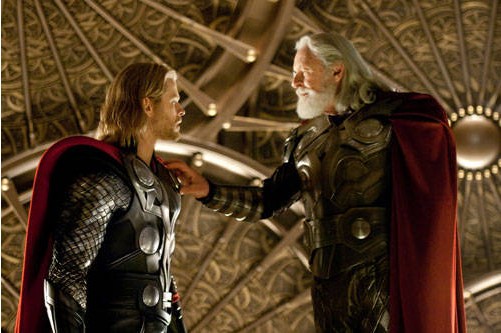