“Life – the sum of all your choices.” 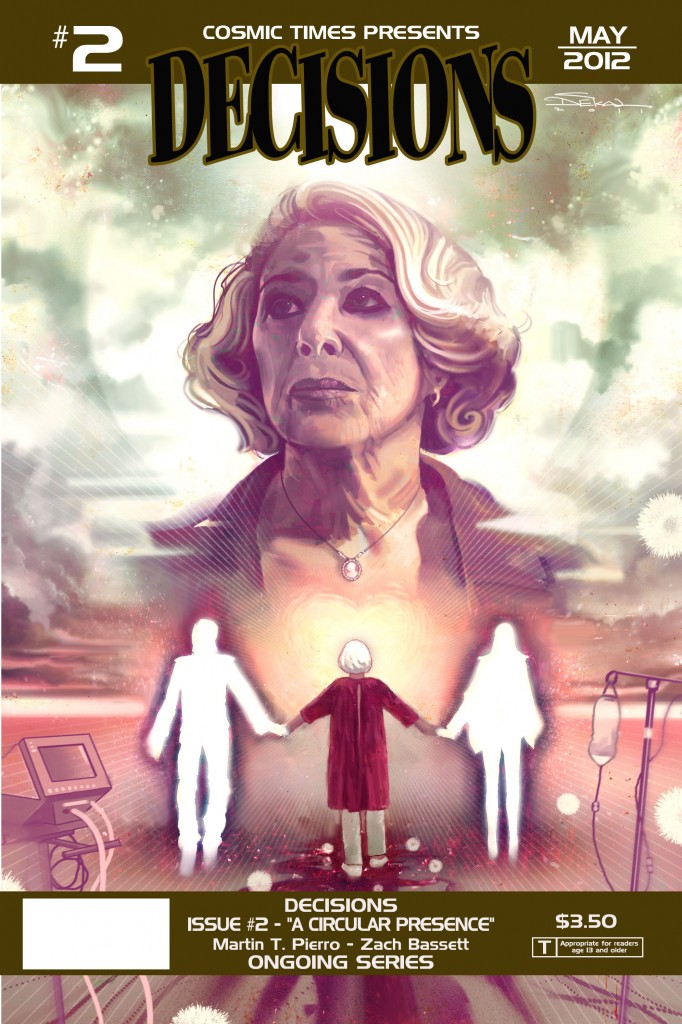 Olivia’s life hangs on by a thread . she has lived a long life and now in her final hour, she is given a unique opportunity.  Two guides take her back through her life – through all the heartbreak and pain she suffered.  They take her to a moment in time when a series of events changed the course of her life, and the repercussions of that time followed her to her death bed. Now faced with the chance to change the course of her own history, will she make the decision to do it?  If so . how will things really turn out for her?
Decisions issue 2 continues the themes and stories of the first issue that has been called “Quantum Leap meets Highway to Heaven”.  For fans of the first issue, this book had been a long time coming.  If you have never read Decisions before, this story stands on its own and is self contained.
Decisions Issue 2 “A Circular Presence” is a 28 page black and white comic published by the South Florida based studio Cosmic Times.  This comic reunites the team from the first issue – writer Martin T. Pierro and artist Zach Bassett, and also features a stunning cover by newcomer Jeff ‘Dekal’ Becker.  This issue will debut at MegaCon in Orlando, Florida on February 17th 2012 – soon followed by a wide release.

About Cosmic Times
Established in 2009, Cosmic Times has become a small-press favorite with such diverse titles as Arthur: The Legend Continues, From Blood and Souled. Publisher Martin T. Pierro (who named Cosmic Times after a fanzine he published back in the mid 80s while still in middle school) is continuing to focus on his goal of making Cosmic Times into a true independent publishing house that focuses on quality storytelling.

More information about Cosmic Times and Decisions can be found at – www.CosmicTimes.net.