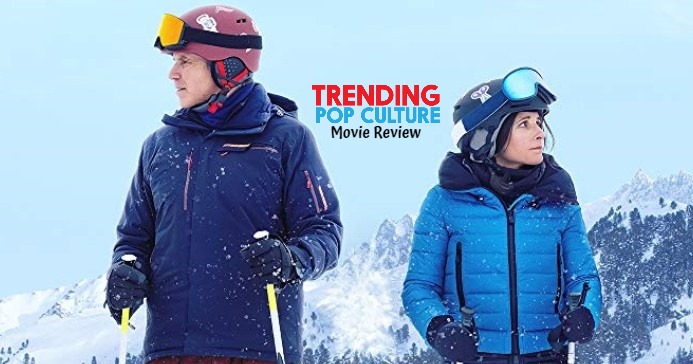 What is it about? Barely escaping an avalanche during a family ski vacation in the Alps, a married couple is thrown into disarray as they are forced to reevaluate their lives and how they feel about each other. Inspired by the motion picture FORCE MAJEURE by Ruben Östlund.

Review: This film is set to be released on Valentine’s Day and many of the promotions are calling it a Valentine’s Day movie. Have to say, there aren’t many Valentine arrows being slung here, but that’s not to say it wasn’t a good film. It just didn’t meet the romantic criteria I was expecting going in.
The entire cast held the movie together well. Julia Louis-Dreyfus (Billie) displayed a good range of emotions throughout. Her ebb and flow of self-doubt and emotional discomfort with her spouse (Will Ferrell) in many scenes was definitely felt by the audience. Julia knocked it out of the park. By far the bread winner of this film. Will Ferrell (Pete) brought a different acting angle in this movie. Viewers will not get the goofy, needs more cow bell, Old School Will Ferrell. It’s almost as though we were in the midst of an Adam Sandler Uncut Gems moment. A known comedian with a bevy of comedic roles in his arsenal, but shines in his first serious acting role. Will Ferrell teases us with a couple of moments within the movie as though he’s about to break out and jar us. One such moment almost arrives during a poignant moment with his wife and friends at a sit-down/get together at their ski lodge/hotel with Zach Woods (Zach) and his girlfriend Zoe Chao (Rosie). Ferrell misses the mark mainly because the script didn’t allow him to expand at that moment. It’s truly a shame because he was right there at the cusp of grabbing the audience, Dreyfus instead steals the scene. Ferrell goes on to almost hit us with “that moment” a couple of more times, but that “oh wow” moment never arrives. So close. So close. This reviewer is still a big fan of Will Ferrell and will never hold it against him for an “almost moment”. He will deliver that Uncut Gems film before he’s done. He needs the right script and this wasn’t it. Fit more so for Julia Lewis. She’s the driving force in this movie.
Miranda Otto plays Charlotte, the hotel manager/owner. Her character is the oversexed, well versed, wealth of knowledge type. Her ski lift conversation with Julia Lewis-Dreyfus was a little over the top, but it was a fun scene. Zach Woods (Zach) of the hit television series The Office, holds his own for his short times he appears on screen. He was a definite welcome to any screen time he appeared in. He delivered. Zoe Chao (Rosie) comes across in a strange way in one scene. What was supposed to be an epiphany scene turned into a weird drudging on about what a 30 year old would do in a certain situation and it turned a bit cringy because of its delivery.
This is a good story with more questions than answers though. Granted, there isn’t enough time allotted for only an hour and 26, but a little more detail would have made for a better understanding of these characters. Why did we not learn more about Ferrell’s father? Why was Ferrell so hung up on his dad’s death? Why was this relationship truly in shambles? Understood, a near-death experience would make anyone “think” about their mortality and reassess their lives, but why was this relationship so shattered in the first place?
These questions do not take away from the performances. The script was as strong as it was going to be and it was more about the stars doing their thing to deliver on it as best they could. The film was enjoyable, but as said from the very beginning of this review, this isn’t much of a romantic Valentine’s Day movie. It has its comedic moments, but the drama fills itself in as real-life issues, maybe hitting too close to home with some and romance doesn’t really live there. The romance doesn’t blossom into a huge score at the end leaving couples on a date with a warm feeling inside. So, if you’re expecting romance, you won’t find it here.
Cinematographer Danny Cohen captures the landscape snow-capped mountains in marvelous glory. This reviewer felt the coldness of each shot, as though I was right there on the slopes.
Soundtrack: Classic, uptempo violins throughout bring the right tempo to this film.
TPC Rating: 2 1/2 Trending Arrows up (out of 5).

See you at the movies.
Carpe Diem.
Jay Katz