From our friends at Heavy Metal! Check it out!

FOR IMMEDIATE RELEASE:
DRAVN EXPLODES FROM THE PAGES OF HEAVY METAL
The World’s Greatest Illustrated Magazine Unveils The Debut Of DRAVN
In Heavy Metal Magazine #262, hitting stores now, fans will be astounded  by the full-issue saga introducing DRAVN, a world very much like our  own, but with a scandalous science-fantasy twist to history and  mythology. What if super-powered heroes and villains have always  existed, buried somewhere under our myth and folklore? And what greater  design do they ultimately serve?
Created by filmmaker Jesse  Negron (AMERICAN FIGHTER PILOT, POP & ME) and written by Negron with Dave Elliott (ATOMEKA, MONSTER MASSACRE), DRAVN features characters  designed exclusively by Hollywood concept artist Keith Thompson (DON’T  BE AFRAID OF THE DARK, PACIFIC RIM), and brought to life by artists from around the globe, including Camilla de’Errico, Sami Basri, and Stanley  Lau, to name a few.
In this visionary story aimed for the  discerning reader, once familiar names and faces will be violently  turned inside out and outside in, as a looming threat to all of creation is unraveling throughout time, with the fate of existence in the hands  of…a young teenage girl in a non-descript trailer park?
Said  lead writer Jesse Negron, “I’ve been obsessed with myth since I started  reading Joseph Campbell at UCLA and now I teach it at the university  level. Myth is humanity’s subconscious and within it lies our darkest  secrets. This was the fuel for the DRAVN myth, which begins in  prehistory with something unknown coming down to influence man. This  interaction creates a “race” of people that are more than just human.  They are the shapers of man. They are the authors of the turning points  of history. They are essentially god-man. Even though they live in  different times, they are all connected as one.”
Featuring an  iconic choice of covers by Kow Yokoyama, Kendrick Lim, Rob Prior, and  Stanley Lau, the $7.95, monster-sized issue is on sale now at finer  books and comics shops everywhere, as well as directly from Heavy Metal. Get in on the ground floor before this property explodes across  multiple mediums, multiple platforms, and multiple universes!
For more information, check out the official DRAVN website, and follow DRAVN updates on DeviantART, Facebook and Twitter.
http://www.dravn.com/
http://dravnofficial.deviantart.com/
https://www.facebook.com/dravnofficial
https://twitter.com/dravnofficial 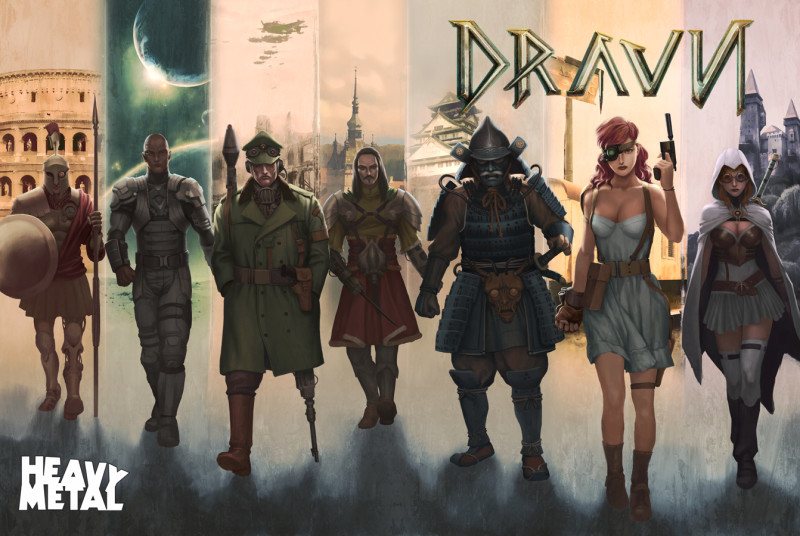