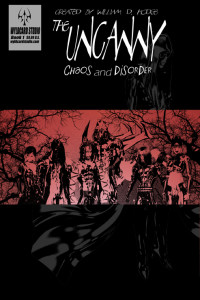 April 22, 2013
For immediate release!
The Uncanny is William D. Hodge´s signature series and it just got accepted by Comixology in their online program. The Uncanny is a story about imagination and the fight to keep it from going extinct.The Uncanny´s Prologue is free for all to read digitally.The Zen Brawler. The Voodoo Wildchild. The Faceless Mystery Man. The New Age Oracle. The Master of the Steel Skin Technique. The Psycho Soul. And the Gnostic spirit. They are “The Uncanny”. The Uncanny, is a mystery school of revolutionaries fighting against conformity and the genocide of the imagination. Mystery school is a university of the soul, a school for the study of the mysteries of the inner nature of man and of surrounding nature.The Uncanny Prologue

A little girl witnesses a battle between the Uncanny and The Thought Police over the life of a stranger. Is this just the wild imagination of a
child or the beginning of the unseen war against freedom and imagination? Living shadows, fractal ego traps and steam powered consciousness. Is The Uncanny a myth or legend?

According to William D. Hodge this “is a super hero book. My take on a new age of super heroes. The difference with my approach is that each of the characters have achieved their abilities through physical or mental means. It’s a team book that will deal with a lot of different subjects. It’s tone and subject are similar to The Matrix (which is a huge influence along with Grant Morrison).

William D. Hodge has completed 7 issues (1 through 6 plus a Prologue issue) in total and a collection of issues 1-3. The books were published
through a print on demand site Ka-blam. All of the issues are on sale, and they stay on sale at indyplanet.com.

The Uncanny will be presented via Comixology and Wyldcard’s site on a weekly basis, with also an instant TPB-download of #1-3 if you do not want to wait that long.

Hodge’s art is a style which truly stands out and how he explains his approach, is like this: “The way I produce my art is completely digital. I
use 3d reference for my work. I create all of the people and most of the props and backgrounds. Sometimes I purchase backgrounds/digital sets. If I need something generic, sometimes it’s easier to just purchase instead of taking the time to create it. I set up the scenes, especially focusing on creating different and interesting lighting. Once I render the scene, I then draw and ink the characters, usually each on their own layer. The backgrounds, ie buildings and things like that, I do work directly over because there’s no need to set up the perspective and I don’t have to rule a bunch of straight lines. I experiment a lot. I use a lot of brushes with different textures and I’ve created a lot. When I draw a lot of the lines, I set the brushes differently to get different effects. Like I said, I like to experiment. I believe in using any tool that will help you achieve the look you want. When I used to ink on boards I used to use sponges and toothbrushes to get textures. The reason I work this way is because I want my stuff to not look like anything else out there. I used to draw from other people’s drawings in comic books. I used to use the same poses everyone else did. Now I create my own poses. I try things from different angles.”