WATCH OUT FOR THE EPIC BATTLE BETWEEN MACHINES WITH TERMINATOR/ROBOCOP: KILL HUMAN #1!

April 18, 2011, Runnemede, NJ – The ultimate killing machine meets the future of law enforcement. In the Terminator’s future all humanity must be wiped out, so when Robocop is woken from an enforced hibernation, Alex Murphy finds himself amongst the final hunted. But will his body side with Skynet? Or can man finally overcome machines? Rising star Rob Williams (Ghost Rider, Punisher Max: Get Castle) and P.J. Holden (Battlefields, Judge Dredd for 2000 AD), create the ultimate tale of life and death for humanity in Terminator/Robocop: Kill Human #1 this July from Dynamite Entertainment!

“I’m hugely excited to bring together two much loved Hollywood war machines in the ultimate mash-up of action sequences, satire and very heavy metal,” says writer Rob Williams. “What makes for a stronger machine? The desire to uphold the law or the desire to wipe out humanity? We’re going to find out!”

“As someone who grew up on a strict diet of 80s/90s machismo and robot laced action movies (not to mention the dark humour of 2000AD) – Robocop/Terminator is dream project for me,” says artist P.J. Holden.  “I’ve known Rob for years, and it’s a real pleasure to finally work with him. I look forward to drawing many, many, things being blown up while I speak all the dialogue to myself in a faux Ahnuld accent (even the dialogue that isn’t supposed to be).”

“We’ve been fans of Rob’s writing for years, and he’s proven himself with an excellent Robocop run for Dynamite,” says Dynamite President and Publisher Nick Barrucci.  “While we’re saddened that he signed an exclusive contract with Marvel, we’re very happy for him and his success.  It reinforces that we worked with such a great writer.  But Rob has written one more excellent story for us, and we’re sure that the fans will agree!  And working with P.J., whose body of work says it all, is perfect to help ensure that this story sure to be a timeless tale.”

“Rob and PJ bring a fresh, wonderful sensibility to both of these characters and each, in their own way, inject a serious amount of “soul” into these two machines and their worlds,” says Dynamite Editor Joe Rybandt.  “Well, that and all the guns and killing.” 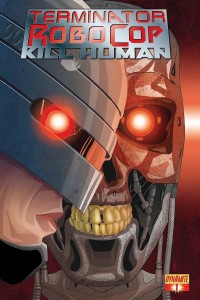 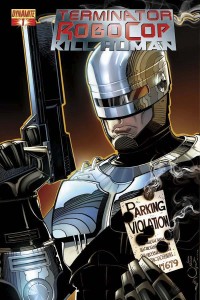