Bluewater sent this press release to InvestComics and it includes writer/Cosmic Times Publisher/Creator of Palmcon in West Palm Beach, as well as a sparce contributor to InvestComics; Martin Pierro. He’s also a great friend, so go out and support this book and buy it. 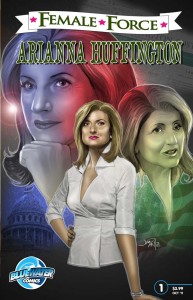 FROM AOL TO BLUEWATER, ARIANNA HUFFINGTON IS FEATURED IN THE NEXT COMIC
BOOK OF “FEMALE FORCE”

Writer and author Arianna Huffington has been a fixture in politics since the 1990s and thanks, to the Huffington Post, she has become an Internet fixture as well. Now Bluewater Comics is telling the story of how a woman from Greece has become one of the most talked about media personalities in the world in “Female Force: Arianna Huffington” due out in Autumn of 2011.

Written by longtime comic book writer Martin Pierro and drawn by artist Nick Justus, the female empowerment comic book series, “Female Force: Arianna Huffington” talks about her time studying in England, her marriage to a congressman, her run as governor of California and how her website was sold to AOL for $315 million.

“The great thing about the ‘Female Force’ series is we can examine the lives of anyone,” said Darren G. Davis, president of Bluewater Comics. “Arianna Huffington is a unique personality. She is a woman who has reinvented
herself when it was required and she still comes out on top.”

Pierro said he spent weeks getting to know Huffington in every article, interview and speech he could get his hands on. ”I took all of the facts I had at my disposal and tried to work them into a narrative that flows, and
though her story is far from over, I feel I gave the comic a clear beginning, middle and ending,” said Pierro. “I’m excited to finally get the book out there to see what people think.”

Justus also did a tremendous amount of research on Huffington to make sure the art was accurate. “For the past couple of months I’ve literally lived and breathed, Arianna Huffington,” said Justus. “In drawing, ‘Female Force:
Arianna Huffington,’ the research was essential and fascinating and I think it shows in the finished product.”

Davis said the story told here is not about a woman who chose a side, but someone who keeps a broader perspective in the world of politics. “The other aspect of her life I admire is that she challenges both sides of the
political aisle,” said Davis. “And to read her story is to understand she is a remarkable woman.”

Justus agreed with Davis’s sentiment. “ I enjoyed learning so much about this true entrepreneur and driving force in the political arena,” said Justus. “She’s led a very eclectic and rewarding life.”

The 32-page issue features a cover by artist Joe Phillips and is available in October 2011.

To find a comic book store near you go to www.Comicshoplocator.com

The “Female Force” series was launched in 2008 and soon the successful series “Political Power” and “Fame” were soon launched. These comics allow Bluewater to delve into the history of certain newsworthy politicians and political movements and understand how a person has achieved the level of office in the government.

Bluewater’ biography comic book series which has been featured on CNN, The Today Show, Fox News and in People Magazine as well as 1000,s of other places.