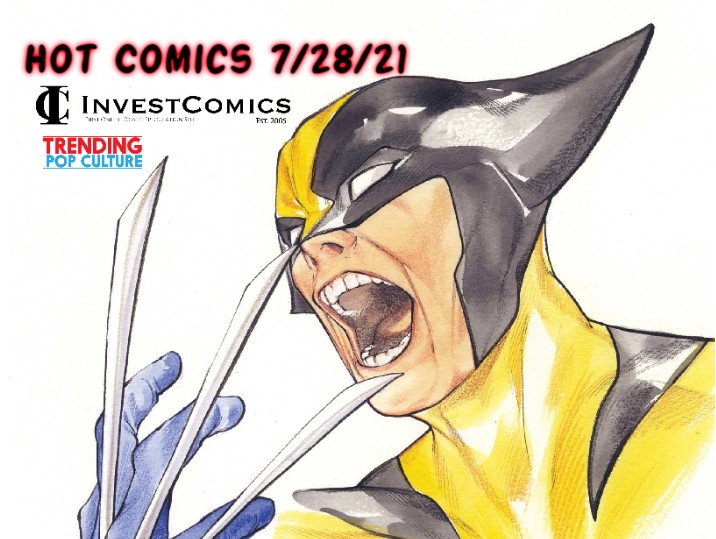 InvestComics/Trending Pop Culture; SINCE 2005.
Here are this week’s top Trending/Spec Comics and Best Cover Art out this Wednesday 7-28-21.
Click on ALL Red-Highlighted LINKS, comic covers to BUY/BID from ALL available eBay sellers.

Superman Son Of Kal-El #1 – This DC release was delayed from two weeks ago and it’ll probably be worth the wait. DC says this comic will literally replace its flagship Superman title. They are going all-in here. We think they’ll succeed with their all-in bid. The Superman character is timeless, everyone knows who and what he’s about. A change in the dynamic of the Superman character itself will be a welcome one. His son takes the mantle now as THE Superman flagship title for DC and brings with him a new thought process, not too far from his father’s, but a new attribution to the mindset of the Superman character we all know and still love. While change and new things do not always jive with everyone, the vibe here is a good one for us. We don’t see such a change here that it begs to be old again. Give this one a chance, you will probably be pleasantly surprised. We have no 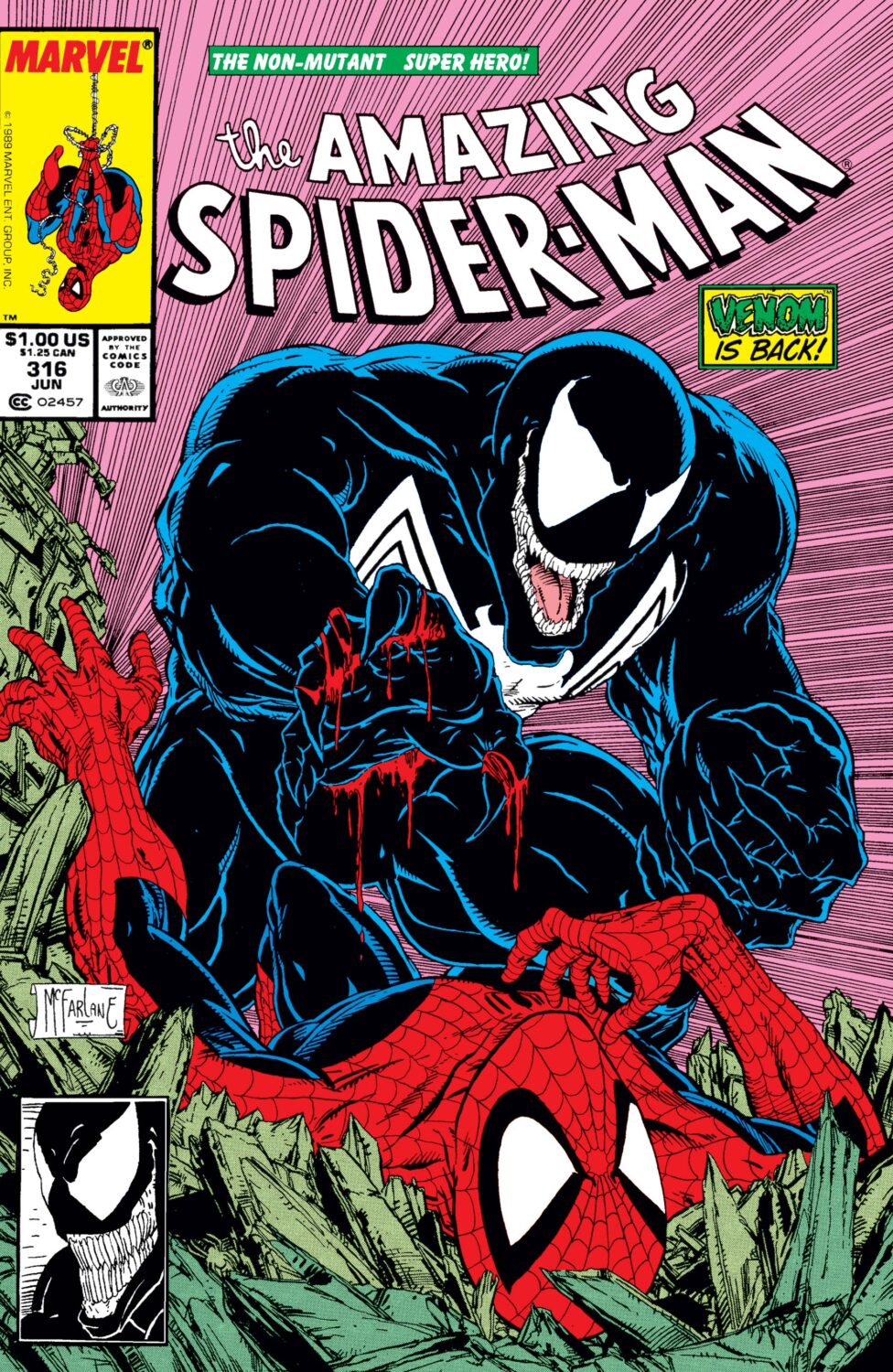 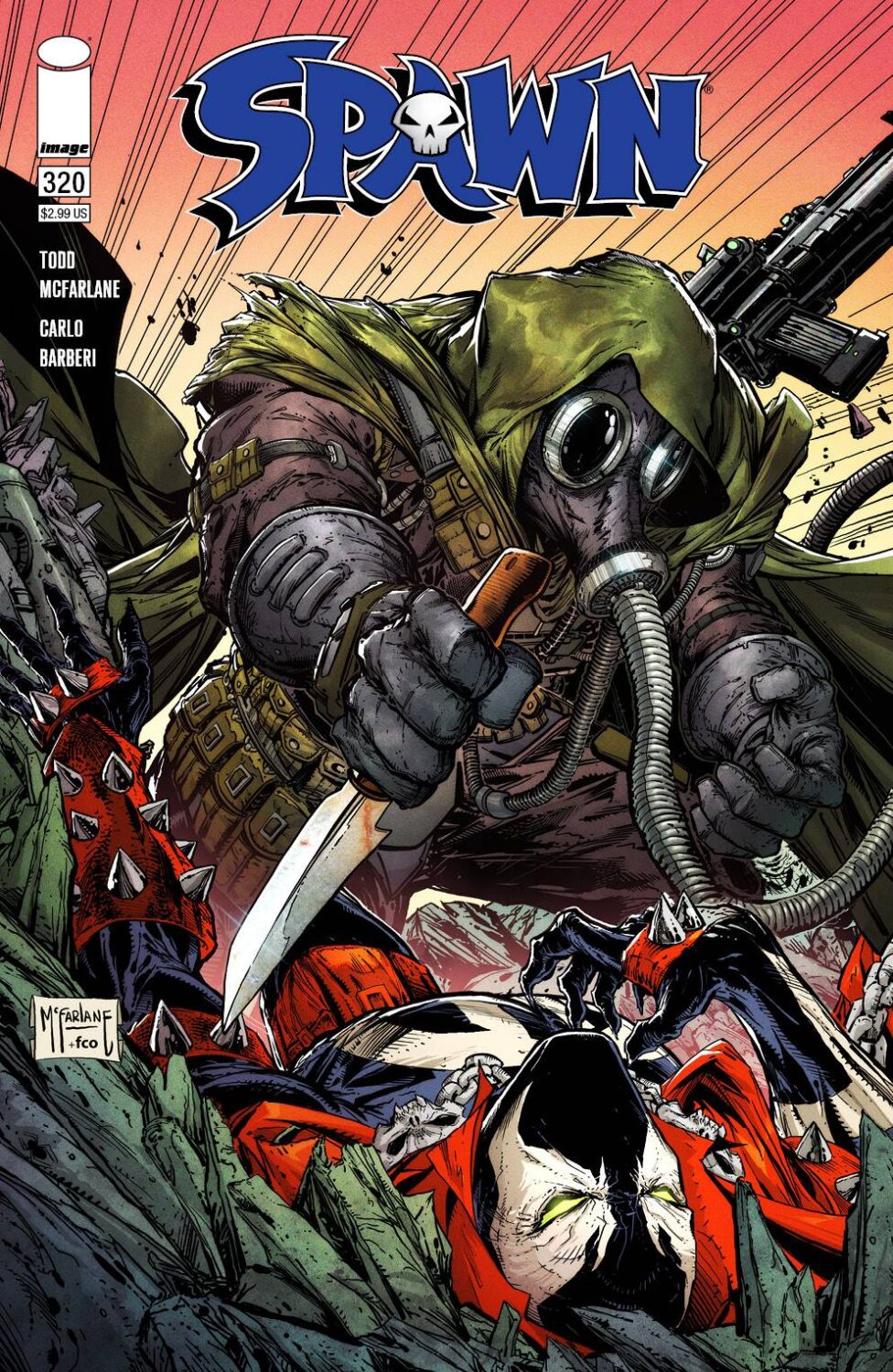 way of verifying the validity of our push here, but the creative team of Tom Taylor (writer) and John Timms (artist) make us feel confident. The lead-in story itself to get to this point makes us solidify our confidence. Junior will be fine here.
Teen Titans Academy #5 – The cover shows readers Red X has his mask off, with some very shocked faces. Pick up this series folks, we’ve said this about Marvel’s Strange Academy, it’s the same vibe here. DC’s answer to that series.
Spawn #320 – It’s been quite the past couple of months for the most popular comic book creator in all the land these days, Todd McFarlane. The new Spawn Universe is kicking some serious butt and the hits just keep coming. The new universe expands everything (obviously), but more importantly, for speculators, there are a bunch of new characters popping up with top-tier creators in the industry introducing them. McFarlane, never one not to grab a moment knows when the iron is hot. We wrote an article a little ways back referring to Todd as the “next” Stan Lee marketing guru. It’s an interesting take on various comic creators in line to promote the world of comic books as Mr. Lee did (The Next Comic Industry Ambassador). Todd McFarlane is “the” guy in our opinion. You can read the article right HERE. So, getting back, Todd strikes the iron with his homage cover to himself with Spawn #320. Todd drew the very first Venom cover back in 1989’s Amazing Spider-Man #316. In 2021, he does a redo with whoever is on the cover here. We proudly display the side by side comparison for your enjoyment. And ours.
Skybound X #4 – First appearance alert. The first appearance of Sea Serpents Heir.
Sweet Paprika #1 – New series from Image Comics. Writer/artist Mirka Andolfo will have another hit here. Get ahead of this one.
Fantastic Four #34 – Marvel is celebrating all month with various Captain America 80th anniversary variant covers by introducing different characters as Cap. This Nick Bradshaw cover has the entire Fantastic Four team paying tribute.

Click on ALL Red-Highlighted LINKS, comic covers to BUY/BID from ALL available eBay sellers

Shang-Chi #3 – We’ve already spoken of Todd McFarlane, but we have to mention him again (sigh). Although cover artist Leinil Frances Yu was being his usual amazing creative self when it comes to this cover, it does remind us of the original “reflective” classic cover from Todd’s Incredible Hulk run 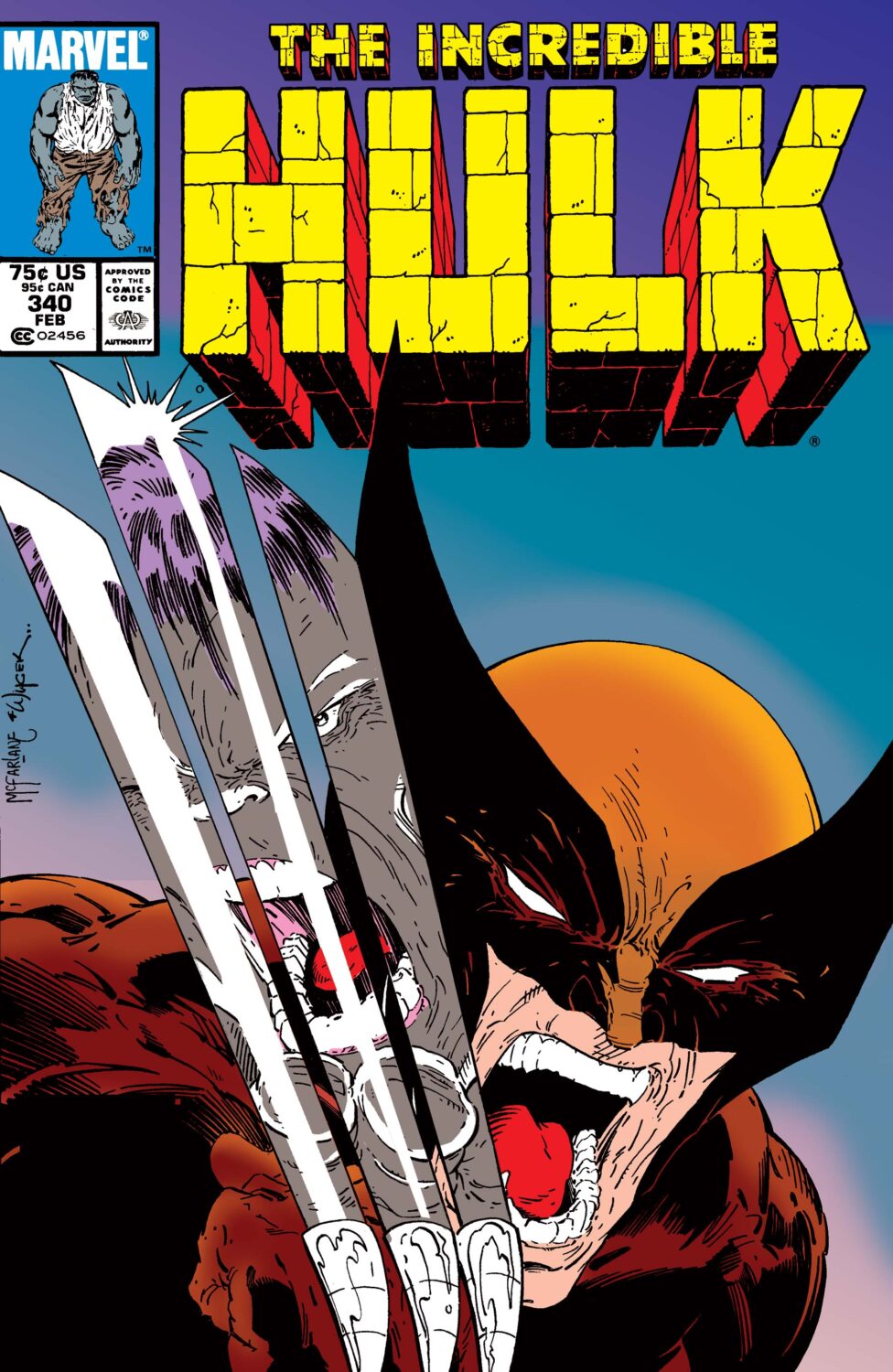 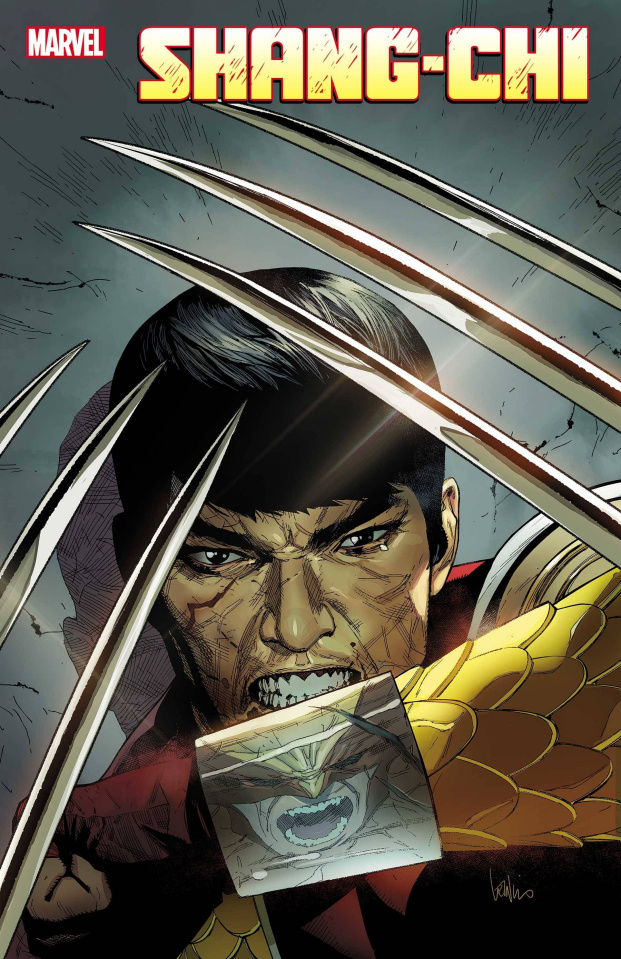 in the late 80’s. Take a look at The Incredible Hulk #340 cover and the similarities are there indeed. Not taking anything away from Leinil, just pointing out the way the two covers share that reflective vibe. Oh yeah, and it’s Shang-Chi vs Wolverine this Wednesday. As Stone Cold would say, Hell Yeah!
Amazing Fantasy #1 – Marvel is all-in on this new timeline/alternate-universe/multi-verse, or whatever you want to call it. Here is another out-of-this-world/realm comic that places various heroes in weird/fantasy worlds they’ve never been to before. This debut comic is written and drawn by Kaare Andrews. Yes, please. Yes. Did you see out Insta 5 (5 questions on our Instagram page) with Kaare Andrews? Click HERE, see if that works for you. If not, just follow us on Instagram and check it out.
Black Widow #9 – Another Captain America 80th anniversary tribute cover. The first appearance of Black Widow as Cap. Artist Mark Brooks.
Teenage Mutant Ninja Turtles Annual 2021 – Here’s an important annual for comic readers/TMNT fans. This comic will be a lead-in to a major storyline in upcoming TMNT comics.
Detective Comics #1040 – DC promotes a backup story (a backup story?) of a major Batman villain meeting their demise.
Cinnamon #1 – New indie series from Behemoth Entertainment looks very interesting. Writer/artist Victoria Douglas.

Click on ALL Red-Highlighted LINKS, comic covers to BUY/BID from ALL available eBay sellers

Batman Secret Files Huntress #1 – We love these secret files comics from DC, but they never seem to get enough love. There are always great reveals, “secrets” if you will within these pages, but nothing that ever blows the lid off in the secondary market. Maybe THIS will be the time?
White #2 – The follow-up to the hit series BLACK continues. From Black Mask publishing.
The United States Of Captain America #2 – Marvel reveals their next “new” Captain America. Each issue here will give an alternate version of Cap. Here we learn about Nichelle Wright.
Symbiote Spider-Man Crossroads #1 – The creative team of Peter David and Greg Land return with a new Spider-Man symbiote story.
Icon And Rocket Season One #1 – Back in 1993, Milestone Comics imprint (DC Comics) focused on African American comic creators creating comics with an emphasis on the African American hero. The late Dwayne McDuffie was one of the founders of this stellar project. A fantastic human being Dwayne was and he is so missed, but here, now, DC returns Milestone Comics to the joy of the entire comic book community.