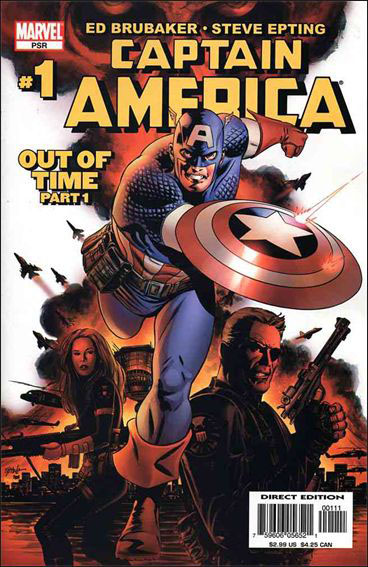 The Winter changes seasons and becomes The Captain!

Captain America # 34 has the NEW Cap making his first appearance. With writer Ed Brubaker at the helm anything is possible with his awesome storytelling, that being said the one thing we all can be almost certain about is the fact that Bucky, AKA Winter Solider will carry the mantle as the new Captain America. If anyone really deserves to carry the name and shield it’s Bucky.

Captain America # 1 (Vol 5) carries the distinct honor of being the first appearance of Bucky as Winter Solider. At a price tag of a measly $6.99 on Ebay, this is an absolute steal right now. Pick this back issue up before the hype machine rolls in. Buying this issue is the first “no-brainer” of 2008. Of course this all depends if Winter Solider indeed is the new Cap, which at this point wouldn’t make much sense if it were not, given the way the storyline has unfolded. This Investment is an extremely low risk given that ALL fingers are pointing to Winter Solider. Sell Captain America # 34 and Captain America# 1 (Vol 5) together on Ebay as a set, you’ll have a set that will compliment each other as well as your bank.