With all of the attention the new Green Lantern movie is getting from SDCC, it’s time to go back into the InvestComics archives and pull out the Green Lantern special. 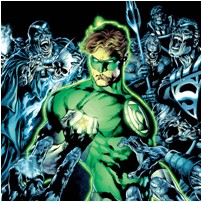 In brightest day, in blackest night,

No evil shall escape my sight

In what seems to be the most anticipated DC character to come to film, it finally looks very close to becoming a reality. We are finally going to get a DC character movie that will be someone other than Superman or Batman. Hopefully this will be the start of many DC heroes to get green lit as well. Too long fans have waited for something, anything regarding a Green Lantern movie. In June or July of this year we may even see our very first look at Ryan Reynolds in the Lantern garb. Of course well just get the hand with the ring shot at first, but who cares?? The excitement that this first picture will generate is going to be extraordinary. It’ll be an official Green Lantern movie poster! It’ll be enough to get those juices flowing with excitement that this movie is truly going to happen now.

Green Lantern has been around for quite some time. There is at least 70 years of possible story to tell. The film will obliviously focus on his origin, but will there be a foe in the first film? Probably not unless it’s going to be a 3 hour movie, which is possible too, but not likely. If Hollywood briefs us on the origin just to get to the special effects as well as trying to fit at least 25 years of history into one film, it will be a disaster. Start with the origin, and then let the villains come in on the sequel. Let it be all about Hal Jordan and the learning of this power the ring possesses. Lead the character into getting to know his intergalactic buddies. Go out on some missions, destroy things, blow things up and then at the end of film number one we meet………Thaal Sinestro! What a great lead in to get the ball rolling on part 2! Heck part 1 hasn’t even come out yet!

There have been many Lantern comics over the 70 year span here and there should be a quick checklist to coincide with the announcement of the filming. While it may be impossible to hit on every single key issue in the Green Lantern market, Comics & Cinema will bring “some” of the key issues you should look for BEFORE the release of that first movie poster. As always, if you wait too long to buy these books and the buzz hits, you have missed the boat. Start fishing for the next big character! 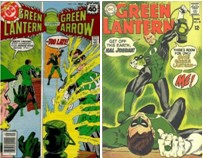 70 years ago, that’s right 70 years ago the world was introduced to Green Lantern. In 1940 an issue by the name of All American #16 introduced Alan Scott as Green Lantern. You can buy this comic right now on Ebay at a “Buy It Now” price of $28,500. That is a CGC graded 8.0 no less. Imagine what kind of money we’d be talking about if this comic was graded higher. Buy this comic at a reasonable price, regarding “reasonable”; while a $30,000 comic is very expensive, the value of this comic will pay back rewardingly once the film is done and Green Lantern mania has swept the world. 19 years after Alan Scott was introduced, in 1959 Showcase Presents #22 introduced the star of our Green Lantern movie Hal Jordan. Would this be a better comic to buy you ask? This is like asking if you like Hersey Kisses or the Hersey bar. It’s essentially the same thing, just a matter of what you the collector would prefer. Yes the very first Lantern is the money shot, but the first Hal Jordan Lantern is the bullet. Either way you go, you win. In THIS particular case an Investment value increase might occur quicker on the Showcase book rather than the All American book, simply because Hal Jordan obviously is the star in the movie. The 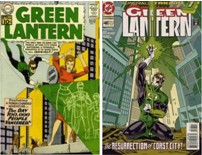 Showcase Presents #22 goes for $7000 in some markets. Look for Hal Jordan to close the gap here big time once Ryan Reynolds and Hollywood do their thing. Another Lantern first appeared 9 years later after Hal in Green Lantern #59 (1968) by the name of Guy Gardner. Legendary artist Gil Kane has his name on this one. Having Gil and a first Lantern appearance together in the same book is like having a fine wine. Look to spend only around $250 for this comic. Guy first became a Lantern in Green Lantern #116 (1979).This comic falls into the $40 range. Our forth Lantern named John Stewart appeared in 1971 in Green Lantern #87. This one is in the $160 range and is drawn by the Green Lantern legend himself Neal Adams (more on him in a little bit). Now we have come to the most current Lantern Kyle Rayner. Green Lantern #48 (1994 Emerald Twilight part 1) is only an $8 comic book. Yes the first Kyle Rayner is only $8. This comic right now is way undervalued and should be bought sooner rather than later. Here’s the thing. All of the above Lanterns that were covered will probably appear either in the first film or the 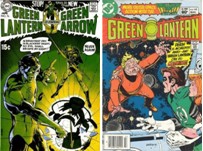 second. So why not get a jump on this now and get what you can? Oh yes and the mother of all villains for the Lanterns? Green Lantern #7 (1961) is the first appearance of Sinestro. The comic comes in at a very nice $800. Awesome buy if Sinestro does In fact become a part of the film. Even if Sinestro isn’t a part of the movie it’s still a great buy. Before we end the checklist of first appearances there is one that would be great if ever a spin off movie would come from it. Green Lantern #141 (1981) gives us the first look at the Omega Men. A $10 comic that was a real hot item at one time when the Omega Men had their thing going in the 80’s. Maybe we’ll get the Omega Men in some form someday, maybe a cool cartoon or something? They shouldn’t be ignored. They have much to offer. 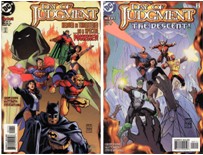 Many writers and artist have had their hands on the Green Lantern books over the decades. Some of them have single handedly transformed the character. There are 3 names that jump out when thinking of creators and the Green Lantern comic book at the same time, Neal Adams, Dennis O’Neil & Geoff Johns. Neal Adams brought Green Lantern artistically to another level. So much so that it’s almost a guarantee, much like Frank Miller’s Dark Knight was brought to the silver screen by Burton, that Lantern will live on film from Neal Adams’ portrayal of him. Having Dennis O’Neil along side of him just catapulted the Lantern series to another stratosphere. Green Lantern #76 (1970) might be a costly book at $4000 in near mint condition, but a very well deserved collector’s item. This comic is essentially the equivalent of Frank Millers Dark Knight book. What Frank did for Batman, Neal did for Green Lantern.  No 2 creators have done for the Lantern series the way they have until Geoff Johns stepped in. Is there a meaner, grittier, nastier, darker tale ever told in Lantern history? The answer is maybe (more on this a little later), but this has to be by a very far margin the greatest Lantern story ever told. Blackest Night will be one of the best tales of all time when all is said and done. Geoff Johns should be credited with bringing Green Lantern to the forefront for Hollywood to take notice. Yes we all know that Lantern has been spoken about for years coming to the big screen, but Johns has not only put his signature on this character, but has probably made the process of getting this movie done a quicker one. Look for 2 comic books to be skipped over for lack of knowledge in Day of Judgment #1 &2 (1999). These comics feature the first time Johns got a hold of Green Lantern(s). The number one issue featuring 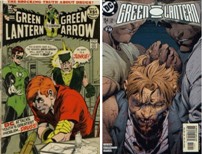 Kyle and number two features Hal. Enjoy finding these comics in the 25 cent boxes at your next comic book convention. Geoff Johns is the modern day Frank Miller of the Daredevil run. So next time you’re at that convention looking for those Judgment issues and Johns happens to be there, first thank him then ask the greatest Lantern storyteller to sign your book. Then if there are CGC Signature series graders on hand, then heck get them graded! Presto, you have instant collector’s items! Of course FIRST head into a quiet area, sit down on the floor, read them, and THEN get them graded! One of the last creators that should get some recognition within the Lantern runs is a veteran writer. He made his creative debut within the pages of Lantern. In 1983 the comic world was introduced to Kurt Busiek. Green Lantern #162 goes for only $5. Busiek did a fantastic run with George Perez on The Avengers. He has also done his self titled Astro City as well as Superman, Spidey, The Liberty Project, Marvels and many more. Safe to say this guy is going to be spoken about for a long time after he gets done.

Some Green Lantern comics have run into controversy. In 1971 DC comics broke a barrier to the point that the “sacred comic code” backed out of slapping their code on the front cover of the comic. Green Lantern #85 dubbed as the “drug issue”, brought to you that team again of O’Neil & Adams. This comic is still sought after all of these years. The comic ranges in the $225 – $250 area. In 2002 Green Lantern saw itself back in the spotlight again for touching on another topic that comics weren’t suppose to. Green Lantern #’s 154 & 155 was a controversial 2 part storyline named Hate Crime. It dealt with the gay bashing that was and still is so prevalent in this country.  Judd Winick and Dale Eagleshaw were the two people who brought this powerful serious topic and story to light.

Now we wait until June/July for that first tease, but for now you have some comics to look for Green Lantern fans!

Well there you have it. Please remember that this article was written back in January 2010, so some of the things in here have either come to fruition or simply just may never be.

That’s it for this week, see you next week, Invest Wisely.