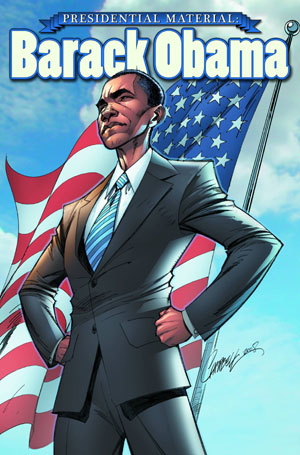 Without getting TOO political, this year’s presidential race is probably one of the most important if not THE most important election in America‘s history. It’s no secret that America is at a place we have never been before. Between the war in Iraq and the financial state, the next president has their work cut out for them. Indeed, this year’s election is an important one in many ways. It’s also going to be history in the making when the night of November forth 2008 comes to a close. Will there be a woman a heartbeat away from the presidency or will America have their first African American president? Barack Obama and John McCain come to this weeks Hot Picks. Well actually only ONE makes the cut and it’s not the ‘Maverick’.


This week IDW publishing gives a nice comic book biography of Barack Obama as well as John McCain. If Barack becomes our next president of the United States of America, this comic will be historic in its own right.

Green Lantern # 35 & Green Lantern Corps # 29  Both of these comics coming out this week claim to be the prelude of the new storyline ‘Blackest Night’. Lantern has been hot for some time. The attention in the past few years has earned the character to get a director recently attached to his film. Greg Berlanti gets the nod. He directed ONE film, The Broken Hearts Club: A Romantic Comedy. DC/WB really wants to get in this Comic book movie game huh? Anyway, get both of these issues so you don’t miss out. Wow, one movie?…………a romance movie?!………

Others To Watch For……

Crossed #1  Garth Ennis has been a busy man lately. Jump on board to Garth’s newest ‘twisted’ creation.

Flash Gordon #2  The number one issue was a quick sellout with great reviews. Why would the 2nd issue NOT sell out?