San Diego, CA (November 19, 2010) – IDW Publishing and CBS Consumer Products are continuing the comic book series based on the cult favorite television show that the fans would not let die—JERICHO! Continuing directly from the finale of CBS’s post-apocalyptic drama, IDW will offer the complete JERICHO comic series from the original creative team behind the TV show. Debuting in 2006, CBS’s Jericho aired for two seasons, following residents of a fictional, post-apocalyptic town.

“The creators and producers of Jericho are so excited about working with IDW to continue the comic book series,” said executive producer of Jericho, Dan Shotz. “Jericho thrives because of the fans that fight for this story on a consistent basis. We have to thank the fans because they are the reason Jericho is here to stay.”

Kicking off in February 2011, IDW will release both JERICHO #4 and JERICHO REDUX. The specially priced REDUX edition will collect the first three issues of the series and prep readers for the continuation with issues #4 through #6. IDW’s JERICHO comics will stay true to the original series, offering fans the story they have been waiting for.

Penned by the show’s writers and producers, Dan Shotz, Robert Levine and Jason M. Burns, JERICHO REDUX is the perfect way for fans to start getting more of the series they love. 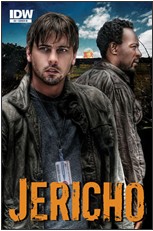 “We’re very excited to be part of this universe,” said IDW Chief Operating Officer, Greg Goldstein. “Jericho is a powerful story with a very active fan base, and we’re happy to be able to continue this adventure with them.”

The saga continues in February with JERICHO #4, and the series continues monthly in March and April. Beginning with issue #4, the series will be written by Matthew Federman, with artist Matt Merhoff, and Scott West, who will provide covers.

Based on the unique history of the JERICHO comics, IDW and CBS Consumer Products will work diligently to make sure that subscriptions to the original series are fulfilled.

About IDW Publishing
IDW is an award-winning publisher of comic books, graphic novels and trade paperbacks, based in San Diego, California. Renowned for its diverse catalog of licensed and independent titles, IDW publishes some of the most successful and popular titles in the industry, including: Hasbro’s The Transformers and G.I. JOE, Paramount’s Star Trek; HBO’s True Blood; the BBC’s Doctor Who; and comics and trade collections based on novels by worldwide bestselling author, James Patterson. IDW is also home to the Library of American Comics imprint, which publishes classic comic reprints; Yoe! Books, a partnership with Yoe! Studios; and is the print publisher for EA Comics and ComicMix.