Image Comics has a secret… and that secret is the cover and contents of SAVAGE DRAGON #166. What does this mean? Wait until Wednesday to find out! 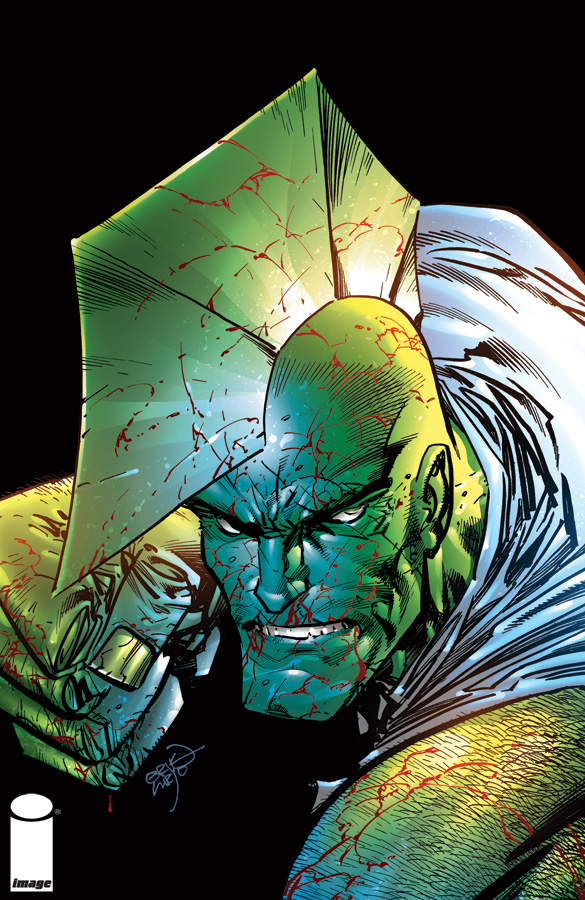 Berkeley, CA – 22 November 2010 – It’s an event so unexpected — so shocking — that nothing will ever be the same. And we can’t tell you a thing about it!
Prepare to have your senses shattered this Wednesday with the release of SAVAGE DRAGON #166 from Image Comics — it’s unlike anything you have ever read or imagined! Savage Dragon has reverted to his original identity, the evil Emperor Kurr, and…
…and…
…but that would be telling.
“There was a time when readers didn’t know what to expect from the next issue of their favorite comic book,” says Savage Dragon creator Erik Larsen, “There were no sneak peeks, no previews or online news sources spelling out, in excruciating detail, what was going to happen in the comic books that were going to be released — and I think that’s taken away a lot of the excitement of going to the comic book store. I want to bring that excitement back!”
Make no mistake: SAVAGE DRAGON #166 and #167 contain huge, cataclysmic Earth-altering events. Your mind will be blown! Your senses will be shattered! But just this once, we’d prefer not to spell out the how, when and why — we’d prefer you find out about it in the pages of the comics themselves.
“Since stepping down from his roll as Publisher a couple years back, Erik has quietly been producing one of the most uncompromising comics on the market,” adds Image Comics Publisher Eric Stephenson. “Where a lot of comics offer the illusion of change, SAVAGE DRAGON has continued to push boundaries and the events of these two issues take Erik’s forward-looking approach to its ultimate conclusion. If you’ve ever been interested in this title, you definitely do not want to miss these two issues.”
SAVAGE DRAGON #166 (SEPT100496), a 32-page full-color comic book for $3.50, will be in stores November 24, 2010. SAVAGE DRAGON #167 (OCT100515) continues the shattering finale on December 22, 2010.
Image Comics is a comic book and graphic novel publisher founded in 1992 by a collective of best-selling artists. Image has since gone on to become one of the largest comics publishers in the United States. Image currently has five partners: Robert Kirkman, Erik Larsen, Todd McFarlane, Marc Silvestri and Jim Valentino. It consists of five major houses: Todd McFarlane Productions, Top Cow Productions, Shadowline, Skybound and Image Central. Image publishes comics and graphic novels in nearly every genre, sub-genre, and style imaginable. It offers science fiction, romance, horror, crime fiction, historical fiction, humor and more by the finest artists and writers working in the medium today. For more information, visit www.imagecomics.com.