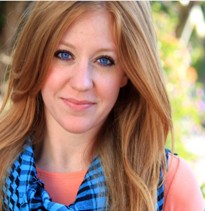 One of my all-time-favorite indie horror films is a little creature-feature gem called SPLINTER. It’s superbly shot, terrifically acted and eminently entertaining. The first main character killed off is actress Rachel Kerbs who plays a druggie that, with her tough but good-hearted boyfriend (played by Shea Whigham) kidnaps a lovey-dovey couple celebrating their 1-year anniversary with a camping trip (played by comic actor Paulo Constanzo and “Mercury Chick” Jill Wagner). Since SPLINTER, Rachel has been involved in various shorts, features, commercials and web series. 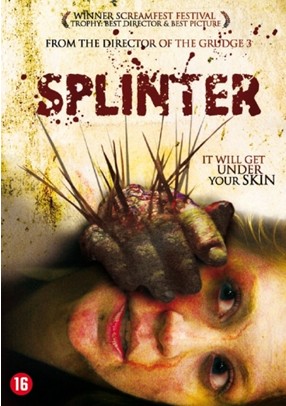 Recently, I contacted Rachel’s manager Bernie Stern to give us an update on her career and upcoming role in the indie film BLESSID. Here’s what she had to say …

1) Your big break (to date) came with your role as drugged out Lacey in the indie creature feature SPLINTER. What was it like working with actors like Jill Wagner, Shea Whigham and comic actor Paulo Constanzo (in a very impressive serious role!)?

(RK:)  SPLINTER was an amazing experience all around. Working with Shea, Jill, and Paulo was a dream. They are all so professional and talented. They made the job so much easier. Playing such an intense scenario every day was a rough task but, working next to them actually made it fun. They would encourage me to push, try different things, and take risks. They were incredibly welcoming and to this day I still lean on them for advice and guidance through this crazy business. I’m just so lucky! I mean, Jill is so so funny and man does she know her stuff! She is a natural with the action and intensity. Paulo is so incredibly gifted. His dry humor and subtle intentions gave SPLINTER an entirely different layer! And Shea, well Shea is the best. I can’t believe I got to work with him on a day to day basis. He taught me so much. He is the most determined, studied, humble, focused person I have ever worked with. They changed me as an actress…for the better, and I am so grateful.

2) On the DVD extras for SPLINTER, the director (Toby Wilkins), DP (Nelson Cragg) and editor (David Maurer) raved about you. One funny note was that David Maurer knew you from a prior film − one that he cut you out of in editing. What was that film and were you a tad nervous that he was editor on SPLINTER? 🙂

(RK:)  HAHA! Well getting cut from projects is part of the gig I guess. You have to be ready for anything. I never take it personally. FOUR SHEETS TO THE WIND is an indie feature directed by Sterlin Harjo. It went to Sundance and rocked it out! My character was a side story love interest for the lead that hindered from the main through line of the story. So I get it. And Toby, Nelson, and David are too sweet for saying such wonderful things about me. They were just amazing on set and they are the reason SPLINTER was a hit!

And no…I wasn’t nervous David was going to cut me again, haha. He owed me! No, Lacey is an asset for the storytelling of SPLINTER. So, I knew she was a keeper 🙂 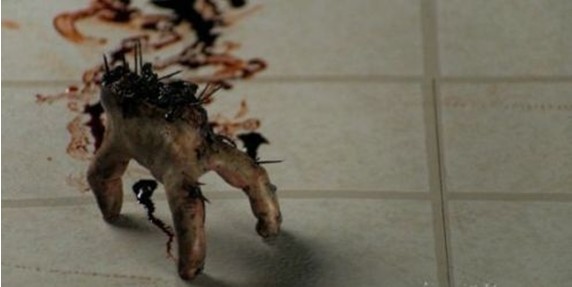 3) Was there a “blooper” moment that is particularly memorable from the film?

(RK:)  Well, not necessarily a “blooper” but, a funny story maybe. We shot in Oklahoma and there were some unexpected downpours that had been happening while we were setting up. So the crew had everything prepared in case the rain picked up again. Well, we were shooting a scene where the four of us (Shea, Jill, Paulo, and myself) are in the car…then, out of nowhere, RAIN! Big time! And it would not let up. The crew threw a walkie into the car and took cover. They told us to hold tight and wait out the rain. But it went on for a good long while. So we told them we wanted some burgers. So for about an hour the four of us sat in full hair, makeup, wardrobe, mics and all, just eating burgers and laughing about how ridiculous this is. Then, as soon as the rain stopped…it was back to one.

4) How did the film do in theatrical release and distribution?

(RK:)  It had a limited theatrical release, but did well. I think the distribution is great! I mean, I’ve seen countless DVD covers that are in many different languages. It’s pretty cool to see that something I’m a part of can reach so many people. Also, Netflix and Syfy play it a lot from what I’m told 🙂 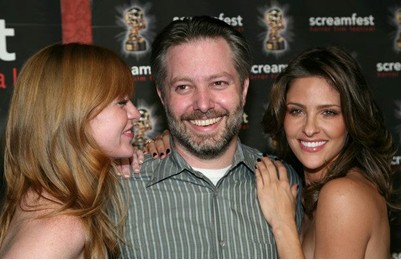 5) Mark Cuban was executive producer on SPLINTER and is also producing a web series called THE VAULT which you are a part of. Tell us about THE VAULT, your role (and what episode you are in), and where we can follow it online.

(RK:)  THE VAULT is a web series that is like a show within a show. It is a “game show” where contestants are all locked in separate rooms. Each contestant is a college student sporting their school logo and each room has an item or items in it, and the contestants have to figure out what it all means or how they are connected in order to get out/win. There is a control board where one contestant can hear and talk to each room. And just when they start to figure it out…of course…a twist.

And…I’m actually in the NEXT episode!

6) Did you ever get to meet Mark Cuban? And if you did, did you make him buy you dinner?

(RK:)  HAHA! No I have not had the pleasure of meeting Mr. Cuban. But WHEN I do…I will buy him dinner. But drinks are on him J

7) What have you been doing since SPLINTER? 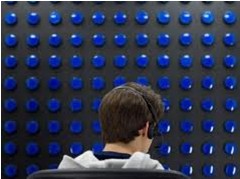 (RK:)  Oh man, so much and not enough! After the SPLINTER premiere I moved to NYC where I did a lot of amazing theatre and got into voiceover work, which I love! After a few years in the big apple I decided to move out to LA. So I’ve been out here for about a year and half now and it’s been interesting. I have done a couple of plays, the most recent being ROUND ROCK which premiered at the Hollywood Fringe Festival. I booked a couple of webseries: THE FAILING MAN, THE KILL CORPORATION, and THE VAULT. I did a short film for USC as well as two other shorts with 52films52weeks (very awesome project!). I shot a SECRET commercial a couple of weeks ago with Bravo’s Jenni Pulos. So much fun! And I’ve been shooting an indie feature, THE WORST YEAR OF MY LIFE, with my friends Trevor David and Amy Vorpahl.

8) You have signed a letter of interest (and soon will be attached) to play the lead role in a small indie file called BLESSID. What attracted you to the script?

(RK:)  Yes-yes!! I’m very excited! I am attracted to irony when it comes to scripts. And BLESSID has that. Sarah’s struggle is her reality and not a far- fetched one. I feel like the script gives me an opportunity to tell a story that is an interestingly flawed journey that is very relatable. It will make people think. It will change peoples’ opinions. I like having a part in that.

9) In SPLINTER you played a hype/druggie and in BLESSID you play a suicidal pregnant woman. Both roles have you looking less than glamorous, which is odd since you are such a fantastic looking actress who recently starred in a SECRET (deodorant soap) commercial. What is it that you think draws you to be cast in these challenging emotionally distressed character roles?

(RK:)  Well, first of all, thank you! It is funny how I am constantly cast in these troubled roles. But, I love to act…and with roles like these…you have to act your heart out. You have to work, study, make choices, take risks, be fearless. I love watching movies that have “real” people in them. No one looks pretty or cares about looking pretty when they are thinking about their next hit, or running from a monster, or pointing a gun at someone. I like to transform into the role. Whether it be a subtle change or a full makeover, it’s my job to do justice to the story, the script, and the character. 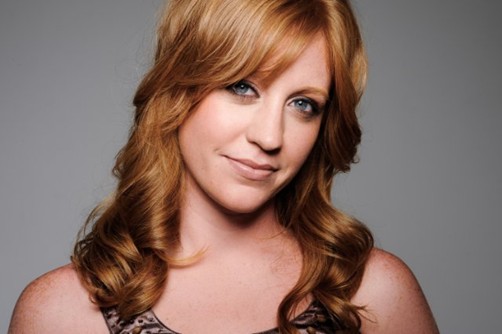 10) A micro budget film doesn’t allow for a lot of rehearsing and prep time — especially since most of the cast for BLESSID (which is being filmed in Massachusetts) who live in LA. How do you plan to prepare for the role?

(RK:)  I will do all of my usual script preparation and I’m sure rehearse during down times on set. But since we all live in LA it shouldn’t be too hard to get together or Skype for some rehearsal time. I’m definitely looking forward to meeting the cast!

11) Although a dark journey, BLESSID is essentially a story about human survival and forgiveness. What do you hope viewers will take away from the film? 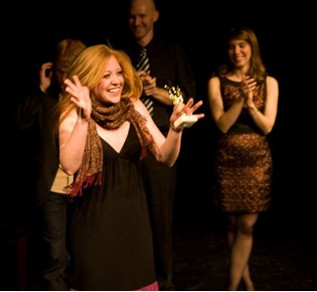 I hope that they are surprised. I hope that it changes their opinions. Some of these characters are flawed in an obvious way that makes it easy to judge. But the story proves them to be real people with real problems. There is always a solution…but it may not be the “expected” one. I hope the story evokes emotion that will stay with the audience and start discussions.

12) Where can we follow Rachel Kerbs (in a non-stalker sort of way) online and catch up on your latest projects?

Thanks Rachel! Looking forward to a great Fall filming.

Bob has also published COLD BLOODED CHILLERS, the award-winning anthology BONE CHILLER and his end times tome 2012: FINAL PRAYER. BONE CHILLER and 2012: FINAL PRAYER are also available on Amazon Currently, Bob is making his family nervous by investing his time and money on an incredible micro-budget film called “Blessid”. “LIKE” it on Facebook. Support it on IndieGoGo. Bob’s website is www.blessidthemovie.com