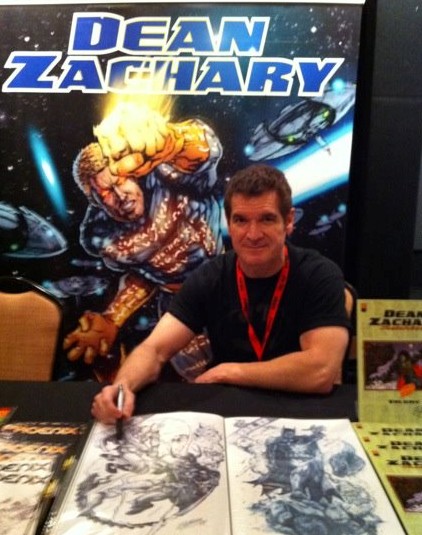 Artst Dean Zachary stopped by InvestComics for a few questions. Dean has worked on books such as  Star Wars: Knights of the Old Republic, Atlas’ Phoenix, and  Batman: Day of Judgment to name a few. Check out what else he is up to this days! Remember to click on these awesome images to enlarge them!

Where are you originally from?

Clarksdale, MS.  Ground Zero for the Blues and near the infamous “crossroads” where legendary blues musician Robert Johnson supposedly made his deal for fame and fortune.

Do you help with the design and advertising for FedEx?

What are you goals for working in the Comic Industry?

In terms of my comic book storytelling, I’d like to be unpredictable and always exceed the readers’ expectations.  In terms of technique, I use the 3 G’s. Gritty, Grainy, Graphite.  Raw pencils demonstrate the creative urgency and hopefully capture the fiery passion I have for drawing.  Sharing that passion is important to me.

How do you feel the Independent Market is doing against the big 2 (Marvel and DC)?

I’ve never quite looked at it as “against” one another.  There is room for Independents, Marvel and DC to meet the tastes of every demographic.  The market is ever expanding, and I am enthusiastic and optimistic that this is a great time to be in the Comic Book Industry.  Creators are no longer limited by a “Bottleneck Distribution” system.  With the internet, we can reach a worldwide audience without limitations of the previous publishing dynamics of the past.

How did you get involved with the 501st?  How many cards are you doing for them?

I was contacted by the 501st after drawing an issue of ‘Star Wars: Knights of the Old Republic’ for Dark Horse and invited to be an honorary member.  They recently asked if I wanted to draw some sketch cards for the upcoming Star Wars Celebration and I couldn’t refuse. They asked for Dark Side characters, and villains are fun to draw. I’m drawing 5 cards for them.  They’ll be some surprises…

OnPhoenix5, did you also do the interior art, or just the cover?

I drew the Covers and Interiors for Phoenix 1-6. My Atlas collaborators have been encouraging, patient and tremendously supportive of my admittedly unique Full Tone Graphite approach to comics.  Going directly from Pencils to inks can be a risky style and Atlas granted me so much creative freedom in terms of Layout, Style, and Script Interpretation.  As long as I moved the story forward, I could combine or change panels at my discretion.

Do you consider yourself a sequential comic book artist, or mainly a cover artist?

Do you remember the first comic you bought?

Marvel Team Up#61 with Spider-Man and the Human Torch vs. the Super Skrull.

Who, in the comic industry, inspires you?

In my formative years it was Neal Adams, Gil Kane, John Byrne, and Jim Lee. Today it’s Olivier Coipel, Stuart Immonen and Jerome Opena.  Coipel’s ability to balance detail with negative space as well as his amazing  storytelling ability is a standout inspiration to me on a daily basis.

Tell us a little about the books you have worked on.

Batman: Day of Judgment fulfilled my childhood dream of drawing Batman.  Star Wars: Knights of the Old Republic gave me a chance to draw Star Wars characters, as well as use my Full Tone Pencil style professionally for the first time. The DCU Halloween Special 2010 included Deadman and Wonder Woman in her classic costume, and from there I was fortunate enough to help ressurect Phoenix for Atlas Comics.

Do you attend comic conventions and, if so, which ones are you going to this year?

Tell us about Hellhound and Stargods.

Stargods was a grand experiment where I explored writing as well as drawing a comic about epic space-faring beings perceived as gods because of their supreme technologies who come back to Earth to discover how to stop an interstellar threat.  I literally learned most of my computer skills working on that project.  There is still a RA action figure prototype out there somewhere waiting to be picked up by some toy company…  Hellhound is a screenplay and 5 sequential comic pages I created about a Spec Ops soldier werewolf who keeps his human intellect after transforming and fights monsters.

Are you hoping that these become books, or are they strictly for the screen?

I’m always interested in both avenues of storytelling for my concepts, but to be honest comics offer more freedom because the budget is only limited to your imagination.

Are these totally written by you, or do you collaborate with others?

With Stargods, I collaborated with Scott Clark, who is currently drawing Grifter at DC. I am the sole creator of Hellhound. 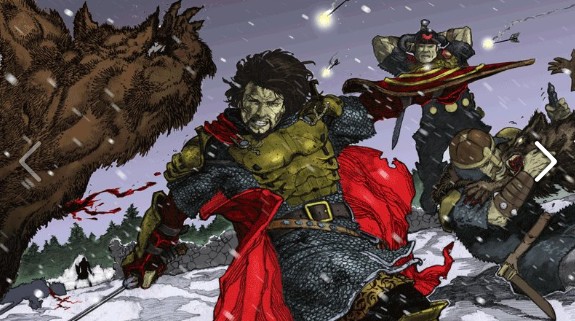 If you can only choose one, will it be writer or artist?

I consider myself an artist who enjoys writing.

What makes you laugh?

Thank you so much Dean and continued success!