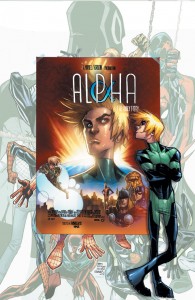 Fans across the globe have been asking, “Who Is Alpha” and this August, in Amazing Spider-Man #692, they’ll find out! Marvel is celebrating Spider-Man’s 50th anniversary in style as the blockbuster creative team of Dan Slott and Humberto Ramos give Peter Parker his very own….sidekick?! When he’s not working with the Avengers of the Future Foundation, Spider-Man has been saving the Marvel Universe on his own for fifty years! But now, with his anniversary right around the corner, that’s all about to change!

This special event, could only be told in this oversized issue celebrating the values that made Spider-Man the world’s greatest super hero for the past five decades and many more to come. And with special variant covers by superstar artist Marcos Martin, depicting Spider-Man through the years, no fan can miss out on this! Get ready for a story about power and responsibility like you’ve never seen before in Amazing Spider-Man #692, swinging into comic shops everywhere, the Marvel Comics app http://www.marvel.com/marvelcomicsapp and the Marvel Digital Comics Shop this August.

Pencils and Cover by HUMBERTO RAMOS

Marvel Entertainment, LLC, a wholly-owned subsidiary of The Walt Disney Company, is one of the world’s most prominent character-based entertainment companies, built on a proven library of over 8,000 characters featured in a variety of media over seventy years. Marvel utilizes its character franchises in entertainment, licensing and
publishing. For more information visit www.marvel.com