With certainty in life what goes up must come down eventually. Of course forgetting about taxes, I’m talking more along the lines of a ball, rocket, grenade, plane, stock market, and sometimes success. There have been many successors that have sustained the duration of a lifetime, but even they have bumps in the road, which brings us to a success that has yet to see a bump in the road. Marvel Entertainment. No not the comic books, boy have we seen some clunkers over the past few years with them. I’m talking about the movie aspect. When will Marvel hit that spot where movie goers give a thumbs down? Maybe it won’t happen for quite some time, but one guarantee here folks it will happen one day. How will Marvel react? Will it begin the downslide of the Marvel Entertainment golden eggs? Probably not, but it will set the studio upright a bit to an 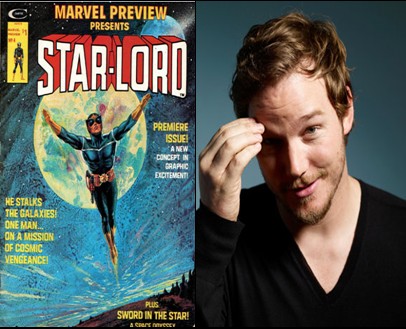 understanding that not everything they release will be a hit, thus maybe getting a slowdown on the movie releases. Now, not trying to be a Debbie downer here, but the reality is that this can and will happen someday.

News came out that Marvel cast the lead actor to play Star-Lord in the new Guardians of the Galaxy movie. His name is Chris Pratt. The rant regarding a Marvel clunker in the theater is not necessarily pertaining to the Guardians film, but pertains to the potential that maybe Marvel may miss here. Then again, maybe not. There are so many variables that go into a movie being successful that one cannot predict the ticket sales, obviously. That said, with the influx of films that Marvel is releasing, the odds are starting to stack against them just a bit. Getting back to Chris Pratt as Star-Lord, Star –Lord’s first appearance came in Marvel Preview Presents Star-Lord #4 in 1976. The aftermarket prices are commanding some big bucks at the moment and there will be no slowing down for a while. The pricing will see a spike and then level off when three things happen A: stills of the film start coming out B: the closer to the film we get C: the trailer release, if perceived in a good way will spike the market even more for a short while. The aftermarket pricing has seen Marvel Preview #4 as high as $200 already. Is this too high right now? Absolutely not. This market is a bull market right now. The asking price will go up from here, way up.

So risk verses reward. If you want to make some cash, definitely pick this book up now. If you want to make some serious cash for your investment, a no brainer here, buy a near mint 9.8 and send it off for grading. If CGC sends you back a 9.8, you have hit the mother lode. Only a total of 29 Marvel Preview #4’s have been graded to date. More so, only THREE are graded at 9.8. Yes fans, this is some very serious cash waiting for you in the aftermarket if you can pull this off.

Now with the negative Nancy stuff mentioned above about Marvel hitting a bad spot, what are the upside sides to the new Guardians of the Galaxy movie? The first thing one has to think is; are we witnessing the beginnings of the modern day Star Wars? The whole Cosmic realm of Marvel’s Universe is vast and has the potential of some serious bank if done right. The Guardians of the Galaxy team will provide a new universe for Marvel to explore. The storylines here can be endless; a trilogy (ala’ Star Wars) would not be that far-fetched. Spinoffs are not to be excluded either. A talking Raccoon though? Marvel Entertainment/Disney knows how to market and put together an amazing product. Guardians of the Galaxy will most likely be a huge hit, but Marvel really has to knock this movie out of the park in order for the Guardian comics in the aftermarket to hold some value, otherwise there will be a huge crash and Marvel will slow things down a bit on the big screen.

Speaking of Star Wars, Star Wars (2012 Dark Horse 2nd Series) #2 comes our way after a sold out number one issue. Don’t expect things to slow down with the second issue. Pick this up before the dark side makes it disappear off the shelf.

Wolverine’s bro comes back in Wolverine and the X-Men (2011) #25. Dog Logan first appeared in the critically acclaimed Origin (#1) mini. Easy book to find, a bit pricey in some areas.

Marvel NOW! continues their restarts with Uncanny X-Men (2013 3rd Series) #1 and Secret Avengers (2013 Marvel) 2nd Series #1. Of course the original Uncanny X-Men #1 appeared in 1963 while the original Secret Avengers #1 first happened in 2010. Any X-Men comic from the Bronze Age back will always be a commodity to hold on to.  Long term investment is the key to your back issues as far as the X-Men go. Early Avengers comics are a fantastic commodity as well. And with the modern Avengers? No one cares about them. Don’t think so? How about this week we get to witness more carnage in Avengers Arena (2012) #4. See no one cares about wannabe’s in the Avengers; off with their heads!

Marvel’s imprint Icon brings Powers back in Powers FBI (2012 Icon) #1. Check out Michael Avon Oeming/Brian Michael Bendis’ first Powers comic in 2000 (Image). Powers has been the talk of television and movies for years. Get this comic now while you still can.

Television has made the Peter Panzerfaust comic in the aftermarket very hot these days. If you are late to the party, there are still refreshments left. Get started on early issues with the release of Peter Panzerfaust (2012 Image) #9 this week.

As noted in last week’s InvestComics Hot Picks #255. Many (not all) female characters have a hard time staying on top of the leader board in a male dominated genre. This week a Justice League member breaks out into her own comic. Check out Katana (2013 DC) #1 and judge for yourself if Katana has what it takes to sustain her own title. The Brave and the Bold #200 (1983) is the first appearance of Katana. I’m looking at little to no movement regarding the aftermarket on this book. Unless Katana really brings something spectacular to the table, don’t expect much. A sellout on the first issue and interest of the storyline thereafter will be the only reason for movement.

Here are some number one issues you should definitely check out this week. Mylo Xyloto (2013 Bongo) #1, and Standard (2013 Comixtribe) #1.

Be sure to go onto the InvestComics Facebook page (LIKE IT) to possibly win a signed copy of Vincent Price House of Horrors #1 (Bluewater) that I wrote. Go now! Contest over on Valentine’s Day. Show your love!

Be sure to subscibe to the InvestComics Newsletter!

(ALL Articles are Property of InvestComics. Any duplication or reproduction of this article, newsletter and or pictures and video of original InvestComics content is strictly prohibited without express written consent from InvestComics.)