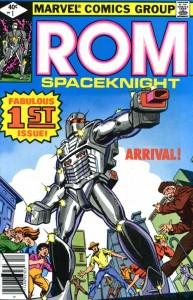 A new hit podcast has emerged and it’s appearing on a weekly basis on InvestComics. Breaking the 4th Wall with Shaun Cobble and Shaun Sorenson is kicking some major ass right now. A couple of weeks ago the first guest to ever appear on the show; comic writer/screenplay writer Joe Harris! The interview was a success with Cobble and Sorenson at the helm. There is a new game that NO other podcast will be playing with our guest. It’s unique and it’s fun. Take a listen to the Joe Harris podcast right HERE and you’ll hear the fun! This plus you’ll get an awesome dose of comic reviews, news, and all sorts of great commentary from Shaun Cobble and Shaun Sorenson. Did I tell you that Breaking the 4th Wall is happening every single week? Last week the guest was Creative Director/Editor-in-Chief of IDW Chris Ryall! The new hit game with our guest couldn’t be played with Chris due to time restraints, but boy did we get a cool scoop about Rom! Remember him? Yes that’s right, check out what IDW and Rom have in common or maybe more so in common than we may know! Click right HERE for that interview.

Sooo…..did you hear that someone in the New DC Universe bit the dust. ::sigh:: Read a quickie about what comic books (namely the big 2) can do to fix an ongoing trend that seems to have passed its time and needs a major fix. The article is called How to make Death in Comics Relevant again….click HERE to read it. Give thoughts and feedback on either the InvestComics Facebook page or down below.

The feature book in this week’s InvestComics Hot Picks has to be Age of Ultron (2013 Marvel) #1. Well not so much the AOU #1 book, but the very first appearance of Ultron. Ultron first appeared in Avengers #54 (1968). The aftermarket is genuinely kind as far as pricing goes. A CGC graded 9.6 is at a Buy it Now position of only $560 on Ebay right now. Not too shabby, but here are some numbers to consider. There are 142 graded copies in the census right now. 18 of those sit at the 9.6 grade. Still not too shabby right? Here’s the better deal, only 3 sit in the 9.8 spot. The 9.8 is the obvious moneymaker, but the 9.6 grades are not at all a bad deal either. So how much of an impact will Ultron make on the Marvel Universe with this event? Probably a decent one and will the popularity carry over after the event is over? Maybe. Ultron is a tricky character to invest in. It’s one of those hit or misses that we must go on our gut instincts. With so many movies coming out from Marvel in the next 10 years or so, Ultron may make his mark there. In the meantime, I would get an ungraded Near Mint copy and hold onto it (maybe grade it if you think you can pull a 9.8 or a 9.6). It’s probably the wise choice.

With all of the crazy happenings going on with the Spider-Man storyline, there’s no telling what the cover of the new Spider-Man issue means or what it may bring us. Will Superior Spider-Man (2012) #5 have the NEW Spidey do the unthinkable? Probably not, but these days you never know!

DC does some explaining; the origin of the new kingpin of Gotham City Ignatius Ogilvy in Detective Comics (2011 2nd Series) #18. And the digital comic making its debut in print from DC; Ame-comi Girls (2013 DC) 2nd Series #1 should be checked out.

Sign up, become a subscriber to the InvestComics newsletter below.