If you are a regular InvestComics monthly newsletter subscriber you found out before everyone else about the very cool things in store for you the fan. Pictured above are the cool giveaways (and one special auction) that will be happening for the next few months. Included in the awesome bunch is the InvestComics One & Done Anthology signed right on the cover by some of the industry’s best. This Anthology which rose over $250 so far for the Comic Book Legal Defense Fund will be auctioned off on Ebay with the proceeds going to the CBLDF. Hang tight for that auction (Lots of giveaway contest beforehand). The auction announcement will be splashed all over the InvestComics landscape, so you won’t miss it when it does happen. So who did exactly sign that cover you ask? How about Dan Parent, Chuck Dixon, Billy Tucci, Neal Adams, Alex Saviuk, Nelson Ortega, Terry Cronin, Ethan Van Sciver, Georges Jeanty, Adam Hughes, Rob Hunter, Jim Cheung, Gail Simone, Bob Layton, Whilce Portacio, Rick Osman, Frank Tieri, Bob McLeod, Jimmy Palimotti, Chris Claremont, Mark Bagley, Frank Cho, Amanda Conner, George Perez, and Paul Pelletier. And to top off the list, I (Jay Katz) will sign the inside. That’s quite the list there isn’t it?? As for the other comics shown; New Excalibur #1 signed by the Legend himself Chris Claremont, Villains United #1 signed by Gail Simone (Interview on InvestComics Youtube coming!), Tales of the Teen Titans #44 signed by the Legend George Perez, Nightwing Target #1 signed by Chuck Dixon, Freelancers #3 signed by Eric Esquivel (Interview on InvestComics Youtube now! And the comic is up for grabs too right now!), Wonder Woman #169 signed by Legend George Perez, Robin II #1 signed by Chuck Dixon,  and last but not least, Vincent Price House of Horrors #1 signed by colorist Jeff Balke and Writer/CEO of InvestComics Jay Katz! Whew! And finally how about an autograph from Terry Cronin? (Offered up right now!) Or maybe you’re a fan of the Walking Dead? How about an autograph from Zombie walker Michael Koske?! Yes lots to take in, but be sure to enter these contests to win.

Okay Hot Picks time. There are certainties in life. The character Thanos is one such case. So is the fact that last Sunday InvestComics informed you guys/gals that East of West #1 is a not to miss book. Yes, listen to the Broker when he tells you about the certainties in the collectors market. It’ll do your wallet some good. So getting back to Thanos now, if you ever doubted anything in the speculation market, this one would not be the one to doubt. If you don’t own or are thinking about owning Iron Man #55, stop thinking and do it. I cannot stress enough how much Thanos is going to make an impact on the movie side of things. The best comparison to make here is actually quite simple. Thanos will be the modern day Darth Vader. I have said this before and I will keep saying it. Thanos’ impact in the theaters will directly impact the back issue market. This said, this week Thanos Rising (2013) #1 will be altering the Marvel Universe as we know it. Yes that villain Thanos is going to bring it and you better be ready. This dude is a bad ass.

…..More certainties this week; Harbinger Wars (2013) #1. This comic will be a quick sell out, so you better grab one off the shelf before they disappear.

….More certainties this week; Regular Show #1. This book will be harder to find than any other in the aftermarket for cover price after Wednesday. Yep.

So with Venom (2011 Marvel) #33 we get the ol’ homage cover thingy going. Isn’t that nice? One little thing here though. Spawn #222 a few issues ago did the same exact thing. Two comics in such close proximity of each other paying homage to Todd McFarlane’s (paid himself homage; he’s proud of himself) Amazing Spider-Man #316. Click on the collage below to see a bigger image of all 3 covers side by side. Which one do you like best? 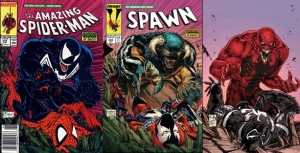 Sign up to the InvestComics Newsletter below! You’ll be instantly cooler guaranteed!