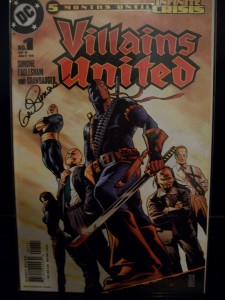 Have you seen or heard about the contest going on around here? Win a Villains United #1 signed by writer Gail Simone (pictured to the right). All you have to do is share the link on Facebook of the Video interview from Orlando’s MegaCon 2013 and tag InvestComics. Once you do that, you’re eligible. Quite simple isn’t it?! Here’s a direct link to the interview right HERE. Sharing is caring! And could win you something very cool!

…..And speaking of video, check out the new InvestComics Blip TV page right HERE. It’s chock full of goodness with some great interviews, Hot Picks, convention coverage, and so much more. All of the videos are from past and present. Go check it out.

This week’s InvestComics Hot Picks bunch is a light one. There is however one huge standout amongst the featherweights this week. This standout will bring some heat in the aftermarket if a certain pattern is followed. By a pattern I mean a couple of things. 1: The book MUST come out on time each and every month. 2: The hype has to be met with some riveting storyline. There are 5 variants coming out on this book. With Mark Miller and Frank Quietly attached here, the hype put forth, Jupiters Legacy (2013 Image) #1 better bring it. Yes granted the storyline has been done before, old superhero (retired), new superhero (idiots), but it doesn’t get tired if done the right way. Look for Jupiter Legacy #1 to fly off the shelf because of the hype surrounding it. And just to reiterate, this book needs to bring it’s A game to the table in order to sustain aftermarket status pricing. It also needs to be on schedule or it will fall by the wayside. A definite pick up this Wednesday however. This collector is taking the Bull approach on this one.

Right behind the standout book of the week is East of West (2013 Image) #2. The first issue was a fast sellout, just as it was predicted in InvestComics Hot Picks #262. The second issue will be no different. Buy this comic, great storytelling and fantastic creative team in Jonathan Hickman and Nick Dragotta.

With recent news of the Rachael Rising comic coming to television, look for Rachel Rising (2011 Abstract) #16 to sell out quickly this week. Have you tried to get a hold of the number one issue? Yea thought so, either nowhere to be found or aftermarket pricing out of range already. Although aftermarket pricing still may have a ways to go, so don’t hesitate if you see this comic in the $20/$30 range. Probably a great buy right now if you are able to find it at that price. I have personally seen one sold for $100 already. The $100 price tag may not be that bad of an “in”, but the same thing could be said for the Walking Dead #1 when that started exploding. It depends on your gut, and if you feel that Rachael Rising will indeed ever truly make it to the television set. So many times there are pilots or agreements and shows die before ever seeing the light of day. A $20 investment is worth the risk for this collector. Oh wait, did you happen to notice that Rachael Rising #1 was in the InvestComics Hot Picks 7-27-11? Yes indeed! Check that out by clicking right HERE.

Here are some comics that may be sitting on your shelf at your local shop that you will need to take a look at and purchase. Mighty Skullkickers (2013) #1 will don a great homage cover to Thor #337. The Walt Simonson Thor cover is one of the best comic covers of all time. Take a look at the side by side right here in the Hot Picks gallery. What do you think? Justice? I think it’s a good representation of a legendary comic. Other books to keep in your radar; Rogues (2013 Amigo Comics) #1, Last Zombie The End (2013 Antarctic Press) #1, Amalas Blade (2013 Dark Horse) #1, Unleashed (2013 Zenescope) #1, Unleashed Vampires Eternal (2013 Zenescope) #1, and Neozoic Traders Gambit (2013) #1.

That’s it for this week. Remember to sign up for the InvestComics newsletter below. You’ll become the coolest person ever. True story.