Back from the New York Comic Con! Another year in the books, and boy was this year’s show spectacular. InvestComics along with Rafael Rosario of RatchetCity Comics dominated the floor with images, as well as come away with a few interviews. Interviews with the creative team of the hit animated series on Fox Bob’s Burgers, Late night host Pete Holmes (TBS), WWE stars Kane and Hornswoggle, WWE studio president Michael Luisi, Directors Jen and Sylvia Soska, Animal Planets’ Finding Bigfoot cast, and the SECOND (with a microphone this time!) interview with Stan “the man” Lee!! Yes it was a great time to say the least.

InvestComics put together a short video montage of various awesome photos taken by Rafael Rosario (with some bad photos taken by yours truly!). Many of the photos in the video do not give the viewer a “full display” of the picture. So there will be a post on InvestComics with a gallery of full displayed images coming soon. Until then, check out the video below. Some of the cosplay this year was simply outstanding. If you see someone you may know in the video, please share it with them.

The crowds were plentiful as always at the show. Expansion will probably happen again either next year or shortly thereafter. The show itself is definitely becoming the San Diego Comic Con on the east coast. It’s more about the glitz and glamour of the media world rather than the comics themselves mostly. Yes the Image Comics/Marvel Comics booths were absolutely a mad house as they always are, but no signs of an actual “mad house” around the comic book booths tucked away in 3 aisles if that many. The comic booths did have some traffic, but it was nowhere as near as it was everywhere else. Yes the media outlets have taken over, and that’s okay too because it gives the comic book world extra juice. Especially small media…..

Small publishing media were doing their thing too! Creature Entertainment was constantly busy, as were their neighbor Cosmic Times. Be sure to look for those publishers at your local show, they are always making their rounds in the circuit. Our pals at Unstoppable Comics were doing very well as we checked in from time to time, as was our bud, our favorite colorist Jeff Balke! Jeff Kaufman of Big City Comics Studio was drawing all sorts of attention with his stellar graphic novel Angel Falling and his Whore book. And our friend; media mogul, owner of Hound Comics Brimstone was uber busy signing and making appearances everywhere. All and all, it was a busy show for everyone.

One of the more puzzling questions at the New York Comic Con this year; what happened to DC??! Yes DC Comics were nowhere to be found. Yes they had their little signing area WAY in the back area in artist alley, but no booth?? Very odd. Many fans were perplexed by this move. DC however, did have the “75 Years of Superman” display in the court by the coat and luggage check! Displayed in glass cases were all of the Superman costumes worn throughout the years from various Superman movies. Once you were over the amazement and coolness of it, it quickly became, “that’s it?” DC dropped the ball here. They could have had various Superman creators along with the displays present. It would have been a nice token/gesture to recognize the artist and writers of the past that have worked on making the Superman comic throughout the years. Have a free giveaway comic, have them sign it or talk to fans, take pictures. It’s quite absurd that Neal Adams (and many others) were sitting in the next room and he (they) weren’t sitting there for a little while to honor this momentous occasion. Rant 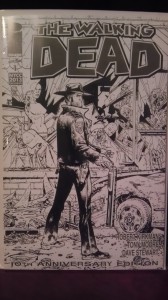 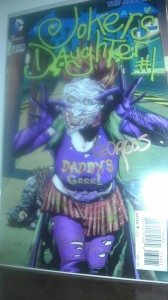 InvestComics got a hold of some very rare Walking Dead variants from the Image Comics booth. The Walking Dead #1 New York Comic Con variant has a print run of only 2000!! If you’re interested in buying one, you can head over to the InvestComics Ebay page right HERE and bid away! Remember only 2000 of these exist! Rare indeed.

Before heading off to New York Comic Con, InvestComics released our first ever InvestComics Publications comic The Dawning #1 by David Whalen. There have been many sales of the book and we will be shipping them out this week. So if you ordered please be patient. Thanks! Oh and just in case you missed the ordering details, click right HERE to order now!

Also before heading off to New York, InvestComics announced a new contest to win a  SIGNED Chris Claremont Excalibur #1! That’s right, legend Chris Claremont! If that doesn’t entice you, how about this? How about your chance to grab one of the hottest books out right now signed by the artist? How about Batman The Dark Knight #23.4 Joker’s Daughter #1 SIGNED by artist Georges Jeanty?!! Yes this comic can be WON by YOU! Share the InvestComics website/Facebook/Twitter/Instagram and all other social media anywhere and you will be entered to win! Be sure to (hashtag) #investcomics when you share. Each contest is separate though, The Excalibur and the Batman comic, so be sure to specify which comic you are after! Also alert InvestComics via Facebook or Twitter or here that you shared!

So you missed that number one issue that InvestComics recommended you pick up. What were you thinking?! So now the question you may ask is what’s worse than a number one issue selling out and missing it? Well a number two issue selling out and missing it! Often times after a number one sells out, the interest tends to make the second issue a sellout as well. The tricky part here is, will the second issue hold up the series or will fans toss it because the story simply is not enough for them to stick around. If the story holds up, then you are definitely onto something as far as the aftermarket is concerned. Case in point this week with Rat Queens (2013 Image) #2, Sex Criminals (2013) #2, and Other Dead (2013 IDW) #2. Image Comics are simply killing it. They have put out more aftermarket greatness in the past couple of years than many can count. They continue to do so this week with these releases. Do not get caught short here, especially with any of the hot books that contain any variants. Get the variants CGC graded (9.8 or better a must), signature series (9.8 or better a must), and sell them for double/triple the value easily.

While we are on topic of number two issues, what gives with DC Universe vs Masters of the Universe (2013) #2? A “Top Secret” black cover obviously reveals nothing and because of this it’s essentially sold out already? Justice League makes an appearance, but wow, it’s a He-Man comic and it’s sold out. Let that sink in folks. But with a legend writer Keith Giffen on the book, it makes sense too.

DC’s lone number one comic to make it to the Hot Picks this week is Beware The Batman (2013) #1. An all ages Batman comic that has the SOLD OUT sign up on the variant. No sold out sign for Marvel’s Marvel Now What (2013) #1, but a fun comic read nonetheless! Marvel will “change things FOREVER” in Iron Man (2012 5th Series) #17. The last part of the Secret Origin of Tony Stark storyline. And going back to DC, we have Justice League Dark (2011) #24 with the New Justice League Dark. Is that really the cover? The white sound? Hmmm, okay.

Samurai Jack makes his triumphant return in Samurai Jack (2013 IDW) #1. Jack’s first comic appearance came back in DC’s Samurai Jack Special #1 (2002). If the world is ready for Jack in a big way, the number one special will be……special.

Pretty Deadly (2013 Image) #1 and Velvet (2013 Image) #1, both from Image Comics are…..you guessed it, SOLD OUT! Velvet #1 includes writer Ed Brubaker and artist Steve Epting! Each week the same format rings true here; buy Image Comics. Be sure to stay on top of these Image Comics, it won’t be long before they open that huge movie studio and start cranking out these comics into cinema beauty. Hey, you never know!

Another zombie book will make its way into the comic book world this week. On the verge of a sellout, be sure to check out Zombie War (2013 IDW) #1. And Conan fans get a new book to read this week from awesome writer Fred Van Lente, Conan People of the Black Circle (2013 Dark Horse) #1.

See you next week! Don’t forget to hit that contest up! And sign up to the InvestComics newsletter too!