Legend Joe Jusko stops by InvestComics™ for a rapid Q&A session called 10 for the Pros™!

Joe Jusko’s work has earned him myriad awards and honors, including two “Favorite Painter” Wizard Fan Awards, multiple trading card awards, a Golden Lion Award from the Burroughs Bibliophiles (previous recipients include Frank Frazetta and Boris Vallejo) and a Chesley Award nomination for best cover in 2001.
Joe’s original paintings are held in collections worldwide, a fact that never ceases to amaze and humble him.
“When I consider where I come from, and how few people actually get to live their childhood dream in their adult life, I feel nothing if not fortunate and very, very blessed.”

His recent work includes a fully painted graphic novel based on Lara Croft, the heroine from the Tomb Raider video game series, which recently won a Certificate of Merit from the prestigious Society of Illustrators, into which he was inducted in 2007. (“Without a doubt the most work I’ve ever put into anything!”), miscellaneous cover paintings for ‘The Oz/Wonderland Chronicles’, ‘four new covers and a tribute poster for Vampirella’s 40th anniversary (“My personal favorite character to paint!”), and covers for a Wolverine/Hercules miniseries, among others, including the normal assortment of painted projects A Green Lantern cover for DC Comics, a collection of pencil drawings due out later this year, and a series of fine art paintings for a new Publishing House (www.theforestprimeval.com) and a  proposed gallery show. His hardcover “Art of Joe Jusko” book was released by Desperado Publishing in May, 2009 to rave reviews, and he’s developing a graphic storytelling property with Steve Niles’ (author of “30 Days of Night”). 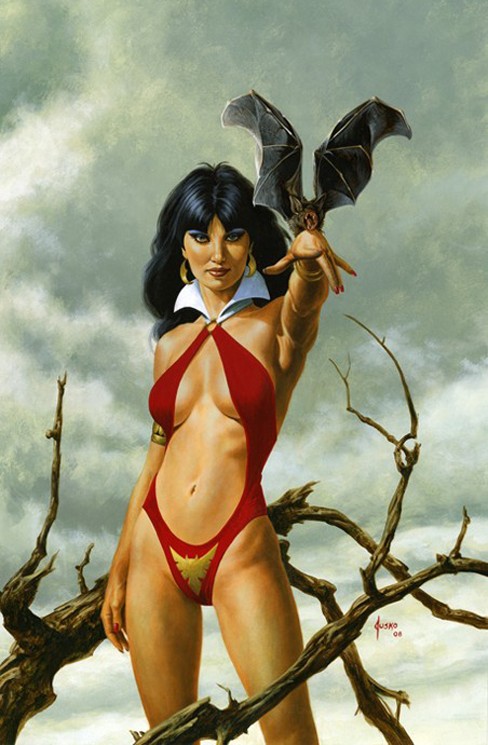 (JJ) Vampirella, as I think the character has lost direction from the original concept.

(JJ) Lots of coffee before, TV time after to wind down.

(JJ) Be honest in your assessment of your own work.

(JJ) “The Art of Joe Jusko” from Desperado Publishing 328 pages of tons of stuff from over 30 years.

Click “The Art Of Joe Jusko” banner below to see and purchase some Amazing art from Joe Jusko.