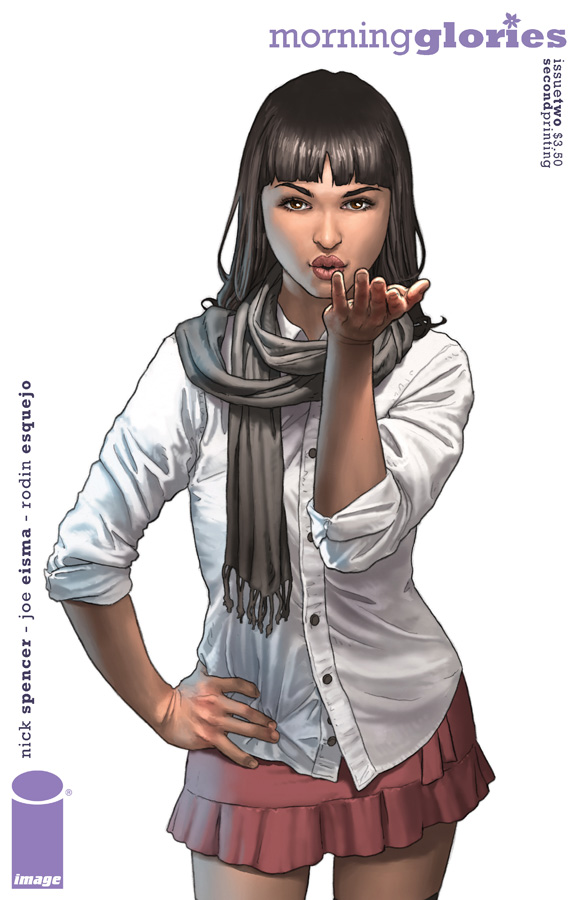 ONCE, TWICE, THREE TIMES A SELLOUT
MORNING GLORIES #2 sold out at distribution level before the book hits stores
Berkeley, CA – 14 September 2010 – The first issue of Image Comics’ MORNING GLORIES has sold out twice, so it’s only natural that MORNING GLORIES #2 is also a sell out at the distribution level! Image Comics is prepping a second printing of the second issue of the hit series written by Nick Spencer and drawn by Joe Eisma, with covers by Rodin Esquejo.
“This is amazing!” declares Spencer. “Never in our wildest dreams did Joe, Rodin, and I ever expect something like this. We’re both thrilled and honored by the enthusiastic response to this story, and we can’t wait to show our new audience what’s in store for the Glories in the months ahead.”
MORNING GLORIES: Morning Glory Academy is one of the most prestigious prep schools in the country. But behind its hallowed doors, something sinister and deadly lurks. When six brilliant but troubled new students arrive, they find themselves trapped and desperately seeking answers in a place where nothing is what it seems to be!
MORNING GLORIES #2 Second Printing (AUG108012), a 32-page cull-color comic book for $3.50, will be in stores October 13, 2010. MORNING GLORIES #3 (AUG100483) will be in stores October 20, which means retailers still have time to increase orders of the third issue of this phenomenal series. The third printing of MORNING GLORIES #1 (JUL108157) is available now.
Image Comics is a comic book and graphic novel publisher founded in 1992 by a collective of best-selling artists. Image has since gone on to become one of the largest comics publishers in the United States. Image currently has five partners: Robert Kirkman, Erik Larsen, Todd McFarlane, Marc Silvestri and Jim Valentino. It consists of five major houses: Todd McFarlane Productions, Top Cow Productions, Shadowline, Skybound and Image Central. Image publishes comics and graphic novels in nearly every genre, sub-genre, and style imaginable. It offers science fiction, romance, horror, crime fiction, historical fiction, humor and more by the finest artists and writers working in the medium today. For more information, visit www.imagecomics.com.