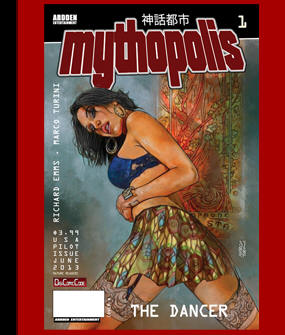 Mythopolis starts off with, what most can relate to, a economical slump in a huge city that is getting worse each day.

A politician, a real double-dealer and womaniser (in fact you already hate him from the get go ) is about to turn the city’s “fortune” around with a deal done with a high-tech company owned by a Japanese business tycoon. Unfortunately for the Politician, this Japanese tycoon has created genetically modified creatures that will, on his command, destroy anything living in their path. While this underlying threat is going on, there are several people linked to each other including a stripper and a cop who will play an integral part of the story at it unfolds.

When did you come up with the series? Any characters or ideas appear anywhere previously?

A) It’s been an idea of mine for some time — going back to when I was EIC at Markosia. It stayed with me for those years until I thought the time was right to get something out there that wasn’t Zombies, Vampires and werewolves but had creatures and events that were, if we had such a thing happen to us, real and forced everyday people into a threatening situations for one end of the spectrum to the other.

Tell me a bit of your personal bio – previous work in comics? What/who is Ardden Entertainment?

A) My main job is running a comic book store which is quite well established in the UK. I gave up retail (2003-2005) to work in TV, Film and publishing and decided that, after a few years, I would move on.

Within a week or so of announcing that I would stop publishing comics I was offered the EIC job at Markosia. Some of the unfinished titles that we were about to publish I took over to Markosia to make sure that they got done. The closure of my first publishing venture wasn’t to do with money it was all down to getting no help or financial investment – which was promised at the very beginning. I did everything from designing and lettering all of the books to packing boxes. I just had enough. I even wrote a title that I had no love for only because the “promise” of it being made into a small budget movie was on the horizon. That horizon got further away every week.

Markosia was good fun, but I wanted to produce titles that would sell thousands not hundreds of copies and after my contract ran out I decided to go back to retail and opened another shop in my home town and have the publishing as a “hobby” unless I found something that could be taken as a serious comic book license.

Skip a year or so and I started to look around for a license that would really make an impact on the comic book market — and that was FLASH GORDON.

Brendan, my biz partner at Ardden, has been a great friend and very supportive for quite a few years, going back to when I was publishing with AP and Markosia. In fact one of the titles I took over to Markosia was Brendan’s really cool Scatterbrain which had serious TV interest and could still be an awesome TV series. Brendan is a great writer and when I told him that I almost had FLASH he was super excited. So, knowing Brendan’s extremely great writing talent, I asked him if he wanted to write FLASH… and that’s when ARDDEN was born. Flash Gordon sold an amazing 15,000 copies of issue #1 and we hit the ground running. It was the license I dreamed of doing and it was finally out there. Ardden had a three year deal with Flash and now we publish our own IP’s and some creator-owned books. Myth is the first ARDDEN IP – which has sold extremely well.

Mythopolis is a 6 issue mini series with the first issue being a pilot issue. We are working on issue #2 now and hope to have it out early next year and there’s a good reason for that delay as the artist – who is staying on board – has become a bit of a name recently with work for Top Cow and DC.

There are some limited edition print versions of #1 that have been out quite a while now. Were these sold in stores in the UK?

A) these were printed for the LSCC in the UK this past February — but we’ve seen some of these copies selling for some £50 ($75) each!

If your local comic shop is sold out today contact www.HoknesComics.com or hoknes at hotmail.com to order copies as this will sell out quickly !  Diamond Distributors is already sold out in advance of release date.