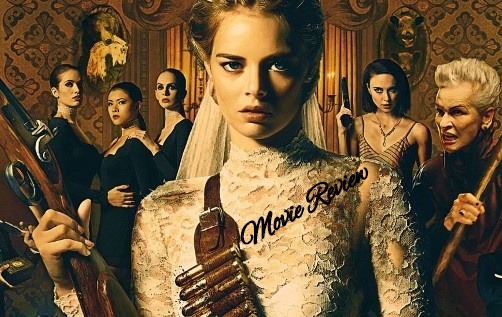 Welcome to the Trending Pop Culture movie reviews. Ready or Not, arriving in theaters August 21, 2019.

What is it about? READY OR NOT follows a young bride (Samara Weaving) as she joins her new husband’s (Mark O’Brien) rich, eccentric family (Adam Brody, Henry Czerny, Andie MacDowell) in a time-honored tradition that turns into a lethal game with everyone fighting for their survival.

Review: This dark comedy is a rollercoaster ride throughout. The buildup occurs quickly out of the gate and leads to the peak of the coaster ride in a hurry. Not too much talk until we immediately get to the meat and potatoes of this journey. A very bleak journey, but a journey nonetheless. This isn’t a bad trip for the audience, it’s a bad trip for many of our characters. The demise of most of these characters had audience members cringing and cheering at the same time. It’s a dark comedy on every level.
Our lead, Grace, played by Samara Weaving plays her part to perfection. A movie goer will attach themselves to Grace because of her true nature of the way she conducts herself. This reviewer, in many instances, found the over emotional character completely on-point with their  process throughout.
Grace is a total bad-as* as one would expect from watching the trailer(s). Once again as said in almost every movie review on this site, this reviewer must refrain from watching a trailer at all because it’s simply giving too much of the film away. Too many times the audience is cheated out of a good scene because of the trailer releases. It’s too bad and movie studios really should rethink their approach as far as trailers are concerned. Getting back to our female lead, Grace. One cannot take their attention away from her. Samara Weaving brings her A-game in every scene, thus having the audience awaiting for her arrival back on the screen when she’s not present. Grace essentially carried this film. This isn’t a slight against the other players, but imagine Ripley in Aliens, or Katniss in Hunger Games, or Gal Gadot in Wonder Woman where their role was as predominant and their scenes were limited. It wouldn’t work because audiences crave for that actress to hit the screen. Not saying any of those previous films mentioned did not have a tremendous supporting cast, as did Ready or Not, but these leads were a strong presence. Samara Weaving was that. A strong presence starving the audience in certain parts to get them amped-up for their return.
A scene-stealer; the pit in the barn. Foul, nasty, brutal, surprising, edge of your seat stuff. Loved it. You will too.
Adam Brody played the drunken brother-in-law with a type of love/hate for his character. Some will find themselves conflicted with Daniel, but the character works out the conflict and has audiences feeling one way eventually. Grace’s husband, Alex Le Domas, (Mark O’Brien) brings his acting chops to the tale. He’s believable as a conflicted fiance/husband, but for some reason I lost interest in caring about him too much. Even after the big sentimental scene with a family member. Kept thinking, where’s Grace? Henry Czerny plays Tony Le Domas. A great actor in a funny role. This isn’t Mission Impossible or Clear and Present Danger good, but he does make us laugh in this film a couple of times. Emilie, Melanie Scrofano, brought more laughs than expected and Kristian Bruun (Fitch) brought the expected laughs. Rounding out the large cast (more players than mentioned here) was Nicky Guadagni (Aunt Helene). This wonderful, sadistic, character really added an element of crazy to the already craziness of the movie. It does not seem possible, but directors Matt Bettinelli-Olpin & Tyler Gillett pull that off. As does actress Nicky Guadagni.
Soundtrack: Composer Brian Tyler, drives the sound in fantastic synchronicity during the films entirety.