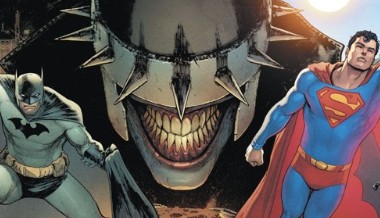 SINCE 2005. Here are this week’s top trending comic books and new items headed your way this Wednesday 8-28-19
Click on the RED links, Images or the comic cover to buy/bid from All available sellers on Ebay
Please note: New comic book releases and all items are subject to change

Batman/Superman #1 – New team-up book from Joshua Williamson and David Marquez. Featuring The Batman Who Laughs.
Doctor Strange #18 – Something big will be going down this Wednesday in this comic. So much so, that Marvel says comic fans will be talking about the issue for years. Check out what the hype is about. Writer Mark Waid and artist Jesus Saiz.
Friendly Neighborhood Spider-Man #11 – Mary Jane Watson will take over most of this issue. It’s an “almost” all MJ comic from Tom Taylor (writer) and Juan Cabal (artist).
The Amazing Spider-Man: Venom 3-D #1 – Marvel goes back to the well once again. This time with Todd McFarlane’s 300th Spidey issue, originally released in 1988. The one that really started it all is now back in a formatted 3-D style.
Spider-Man: Life Story #6 – Writer Chip Zdarsky is killing it with his history of Spider-Man with a twist. Here, Mark Bagley (artist) and Chip conclude their story. It’s the year 2019 and readers get the story of a 72 year old Spider-Man. Witness the very last call of action of our beloved Spider-Man.
Marvel Comics #1000 – Not only is Marvel saying that the entire Marvel Universe will appear in this book, but a new character will be introduced. Who knows if this new character will be a major one or someone that is forgotten in a month or so. Either way, this comic will be one to read. Lots of promises from Marvel accompanying their banter. Just about any comic creator you can think of will be inside his comic as a contributor. A TON of variant covers to choose from as well. The most “rare” one will command the most ridiculous monies if the new character has any validity to them. The absurd monies for the “rare” variant will not be outweighed by common sense.

House of X #3 – The previous issue created a buzz, here is the follow up. We’ve told readers to keep an eye out on this series since the start of it. Don’t blink, you’ll miss more. Writer Jonathan Hickman and artist Pepe Larraz.
Power Pack: Grow Up #1 – Way back, quite a few years ago, many haters were perplexed by the “Hot Pick” at the time from InvestComics regarding Power Pack #1. We informed (open minded) readers about Disney buying Marvel and having a superhero team like Power Pack in their wheel house. Many (with open minds) understood and followed the speculation advice at the time. Since that blog, many times thereafter, rumors and unofficial announcements have risen, thus giving the premiere issue a bump. The same goes for the Moon Knight’s, She Hulk announcements, etc, old news to InvestComics faithful. Power Pack #1 is in its cooling period right now because many speculation experts and websites haven’t gotten around to it (again). This all said, the new Power Pack number one arriving this week will be from the original writer; Louise Simonson and artist June Brigman. They’ll have readers/collectors buying it up. Power Pack will trend once again. Old and new.
Wonder Woman #77 – A big thorn in Wonder Woman’s side. Cheetah is back. Writer G. Willow Wilson and artist Jesus Merino.
Teenage Mutant Ninja Turtles #97 – This series continues to be a trending one. No slow-down in sight either. Leading up to the 100th issue, we’re sure another big surprise awaits us all there. Kevin Eastman, Tom Waltz and Michael Dialynas.

Spider-Man Velocity #1 – The first NEW/solo story based on the Spider-Man Gameverse. Look for new characters to pop up and possibly break out. Maybe eventually spilling over to the regular Marvel U. Dennis Hopeless Hallum writes and Emilio Laiso pencils.
Harley Quinn Breaking Glass – DC’s new imprint “DC Ink” gives readers a new, younger vibe. A new Harleen Quinzel (Harley Quinn) story to feast on here by Mariko Tamaki (writer) and Steve Pugh (artist).
The Superior AOC #1 – It’s quite amusing to watch the political landscape go a bit nuts over comic books like this one. People on the left and right arguing…..over comic books. It’s hysterical. So here is congresswoman Alexander Ocasio-Cortez in her own superhero comic. She’s a lefty, so, many righties will not be purchasing this one. Look for the comic to sell out anyways, despite the division and arguing over comic books. Creators; John Barron and Shawn Remulac.
Batman Curse Of The White Knight #2 – DC Black Label imprints are bringing the goods. Great storytelling and art. Here is Sean Murphy’s second Batman book.
Marvel Monsters #1 – Once again, another genre brought up by the InvestComics site years ago. Maybe this will be the turn the Marvel monsters need to get popular once again. Red Dinosaur has broke out into his own cartoon with Moon Girl, so who knows? Writer Cullen Bunn will definitely have comic readers interested as Superlog and Scott Hepburn are on pencil duties.

Absolute Carnage #2 – Lots of Carnage comics released this Wednesday. All have the potential to introduce something you’ve never seen before. Writer Donny Cates is firing on all cylinders. Artist Ryan Stegman is killing it as well. Thus, we have Carnage trending on all social media.
Absolute Carnage Miles Morales #1 – Writer Saladin Ahmed and artist Federico Vincentini.
Absolute Carnage Lethal Protectors #1 – Here we have writer Frank Tieri, so you know you’ll get some great storytelling. Art by Federico Vincentini.
Mountainhead #1 – Delayed from last week. Creators; John Lees and Ryan Lee.
Fantastic Four 4 Yancy Street #1 – The Thing appears in this solo book. The series will focus on each individual FF member. Gerry Duggan writes, Luciano Vecchio and Greg Smallwood are the artists.