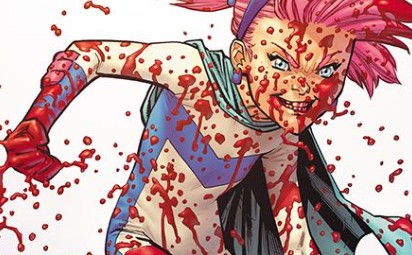 Captain Marvel #8 (2nd print) – A second print book makes its way to the trending files this week. The first cover appearance of the new character “Star” on the cover.
Pretty Violent #1 – New series from Image Comics. Expect this one to go back to the presses after Wednesday. Writers Derek Hunter (plus art) and Jason Young. A fantastic Ryan Ottley cover will turn heads.
Canto #3 – Each of the previous two issues have sold out. This IDW trending hit is brought to you by writer David M. Booher and Drew Zucker. Better get this comic before it disappears off the shelf like the last two did.
Dead End Kids #2 – The premiere issue from Source Point Press sold out and here comes issue number two. Writer Frank Gogol and artist Nenad Cvitcanin.
Love She Offered #2 – It’s the same story as the aforementioned from Source Point Press. Except, this comic is already sold out. Writer Glenn Moane and artist Tirso Llaneta.