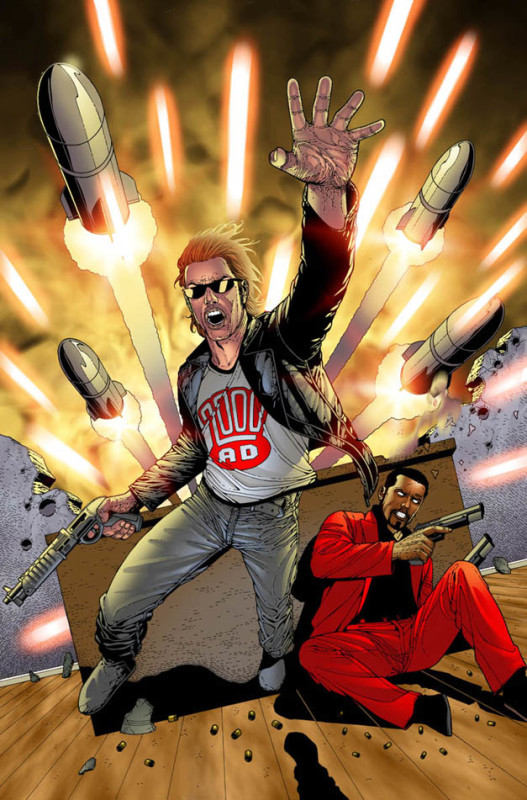 San Diego, CA (May 24, 2013) –It was announced today that the exploits of 2000 AD’s Finnigan “Finny” Sinister and Ramone “Ray” Dexter will be hitting American shores when the long-running world of SINISTER DEXTER is reprinted by IDW in 2014! The pair of futuristic “gun sharks”—read: hit men—will be roaring in hot from Downlode, the European mega-city they call home, and they’ll be bringing an unbelievable cast of characters with them! From the original stories written by Dan Abnett and drawn by Andy Clarke, SINISTER DEXTER chronicles a vibrant, madcap world of futuristic intrigue and action. Deadly ninjas, acrobatic flying car chases, shape-shifting robot assassins, a devious Yakuza? All in a day’s work, dear reader. All in a day’s work.

‘”With its deft mix of black comedy and gritty urban action, the exploits of Sinister Dexter have remained a popular mainstay in 2000 AD for the past 17 years,” said 2000 AD’s Editor-in-Chief Matt Smith. “With IDW reprinting a selection of their tales, I hope a whole new audience is going to enjoy meeting the gun-lovin’ criminals.”

“I’m happy to expand our relationship 2000 AD,” said Chris Ryall, IDW’s Chief Creative Officer/Editor-in-Chief. “It’s been a pleasure working with the guys there, and even moreso because the books that we’re producing together are such fun things to expose to this market in an even grander way. Abnett and Clarke’s Sinister Dexter stories are gritty, crazy, and action-packed bursts of adrenaline and I can’t wait to set them loose among American comic readers.”

“IDW have demonstrated a real passion for 2000 AD’s stories and we’re delighted to develop our relationship with them further,” said Ben Smith, Publishing Manager for 2000 AD and Rebellion. “It’s fantastic to see the amazing work of two such significant creators as Dan and Andy set to reach even more readers.”

While specific plans have yet to be announced, it’s certain that between the thousands of pages of explosively excellent material, there are more than a few worthwhile collections to be had!

About IDW
IDW is an award-winning publisher of comic books, graphic novels and trade paperbacks, based in San Diego, California. Renowned for its diverse catalog of licensed and independent titles, IDW publishes some of the most successful and popular titles in the industry, including: Hasbro’s The TRANSFORMERS, G.I. JOE and MY LITTLE PONY; Paramount’s Star Trek; Nickelodeon’s Teenage Mutant Ninja Turtles; 2000AD’s Judge Dredd; The Rocketeer; Toho’s Godzilla; Wizards of the Coast’s Magic: The Gathering and Dungeons & Dragons; HBO’s True Blood; and the Eisner-Award winning Locke & Key series, created by best-selling author Joe Hill and artist Gabriel Rodriguez. IDW is also home to the Library of American Comics imprint, which publishes classic comic reprints, and Yoe! Books, a partnership with Yoe! Studio.
IDW’s critically- and fan-acclaimed series are continually moving into new mediums. Currently, Warner Brothers and Barry Sonnenfeld are attached to adapt LORE into a feature film starring Dwayne “The Rock” Johnson and Jerry Bruckheimer Films and Disney are creating a feature film based on World War Robot, with Michael Bay‘s Platinum Dunes and Sony bringing Zombies vs. Robots to film.

About 2000 AD and Rebellion

2000 AD is the Eisner-nominated, multi-award winning 32 page, British weekly anthology – an explosive cocktail of sci-fi and fantasy, infused with irony and wry black humour. Home of iconic characters such as Judge Dredd, Halo Jones, Strontium Dog and Rogue Trooper, over the last 35 years it has launched the careers of some of the top names in global comics, including Alan Moore, Mark Millar, Grant Morrison, Brian Bolland, Steve Dillon, Jock, and Peter Milligan.

2000 AD, its monthly sister publication The Judge Dredd Megazine, and its extensive range of graphic novels are available to buy online, through a dedicated iPad app, from major magazine retailers in the UK and Europe, and from all good comic stores in the US.