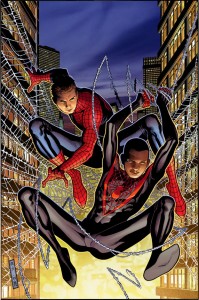 Peter Parker and Miles Morales Meet For The First Time in June
New York, NY-April 11, 2012-This June, it’s time for Peter Parker, better known as the Amazing Spider-Man, to cross worlds and meet Miles Morales…the all-new Spider-Man? Marvel is proud to announce Spider-Men, an all-new five issue landmark story from award-winning author Brian Michael Bendis (Avengers VS. X-Men, Ultimate Comics Spider-Man), red-hot artist Sara Pichelli (Ultimate Comics Spider-Man) and acclaimed cover artist Jim Cheung (Avengers VS. X-Men), which brings Peter Parker and Miles Morales together for the first time. That’s right, the Spider-Man from two different realities-the Marvel Universe and Ultimate Comics Universe-bring their worlds together for a battle no one web-head could win!
When Spider-Man tracks down one of his deadliest villains, he suddenly finds himself thrust into another world where Peter Parker is dead…and there’s a new Spider-Man in town. As these two heroes learn the truth about their identities and their universes, they’ll embark on a journey that’ll leave them forever changed-and reveal a startling truth about a key player in the Spider-Man mythos!

“This year is the 50th anniversary of Spider-Man and we’re so happy that the stars aligned for us to tell a Spider-Man story that nobody has ever seen before,” said Bendis. “It’s an honor and a privilege to present both this story and these characters to fans on such an auspicious occasion. The work Sara has done on Spider-Men is a step above the
already high standard that she has set for herself on our Ultimate Comics Spider-Man series. For me, this is a celebration of the best character in mainstream comics and some of the best art mainstream comics has to offer.” 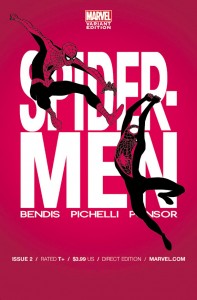 In 1962’s Amazing Fantasy #15, the world first met Peter Parker and saw him become the hero Spider-Man in the Marvel Universe. Soon after, Spider-Man became a pop culture sensation, launching multiple television series, blockbuster films and some of the most popular comics of all time. Then in 2011, Marvel introduced Miles Morales, a new character of African American and Hispanic descent, who became Spider-Man in the Ultimate Comics Universe after that world’s Peter Parker perished.

“This is one of the biggest stories in Marvel history,” said Axel Alonso, Editor in Chief, Marvel Entertainment. “Peter Parker and Miles Morales are two of our most popular characters and fans have been clamoring for them to meet-we’ve got quite a few surprises in store for both characters. This is only the beginning of how we’re celebrating Spider-Man’s spectacular 50th Anniversary.”

This June, swing into action with world’s most amazing super heroes in Spider-Men #1.
To find a comic shop near you, visit www.comicshoplocator.com or call 1-888-comicbook.

Marvel Entertainment, LLC, a wholly-owned subsidiary of The Walt Disney Company, is one of the world’s most prominent character-based entertainment companies, built on a proven library of over 8,000 characters featured in a variety of media over seventy years. Marvel utilizes its character franchises in entertainment, licensing and
publishing. For more information visit www.marvel.com