Marvel’s experiment into bringing top indy artists in to tell their own tales with Marvel characters is a success!

Strange Tales #1 Sells Out and Returns With A New Printing!

Marvel is pleased to announce that Strange Tales #1 has sold out at Diamond (though copies may still be available at retail level) and will return with Strange Tales #1 Second Printing Variant!  Clocking in at 48 pages and featuring no ads, this extra-sized issue features all your favorite Marvel Heroes in stories that ComicBookResources.com raves “will please everyone.” The hottest independent creators in comics deliver groundbreaking new stories of Spider-Man, Hulk, Wolverine, Doctor Strange and more! This second printing variant features a black & white version of Paul Pope’s stunning cover!

“Bringing readers multiple takes on the Marvel mainstays, Strange Tales, including Spider-Man, the Inhumans, the Hulk (a favorite of the indies, it seems), She-Hulk, Dr. Strange, and more, the book doesn’t lack in variety. It presents the breadth and depth of styles of comedic styles using hyper-exaggerated versions of Marvel’s characters.”- Charles Webb, ComicBulletin.Com

Marvel urges retailers to check their orders on Strange Tales as the series continues to garner media attention! Be sure to pick up Strange Tales #1 Second Printing Variant! 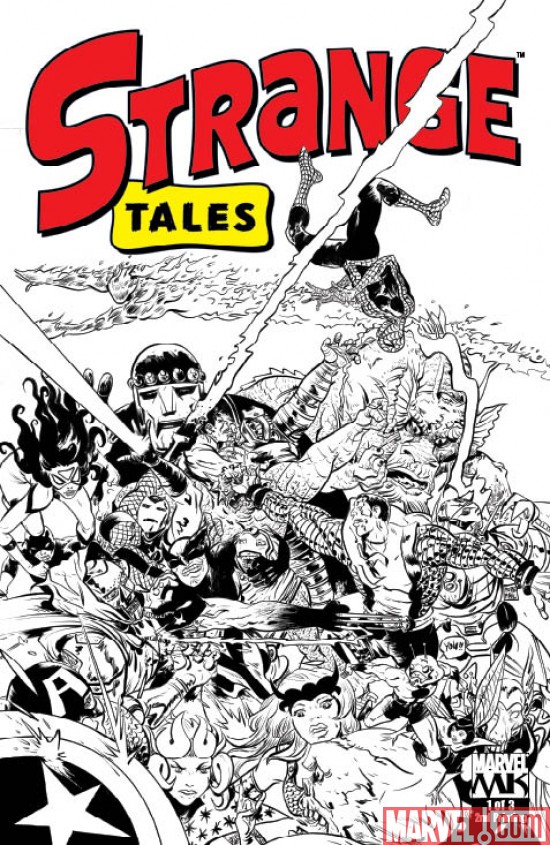