Image Comics continues the NEXT ISSUE PROJECT with CRACK COMICS #63

Berkeley, CA – 30 September 2010 – In December, another Golden Age classic will get its next issue with the NEXT ISSUE PROJECT: CRACK COMICS #63. 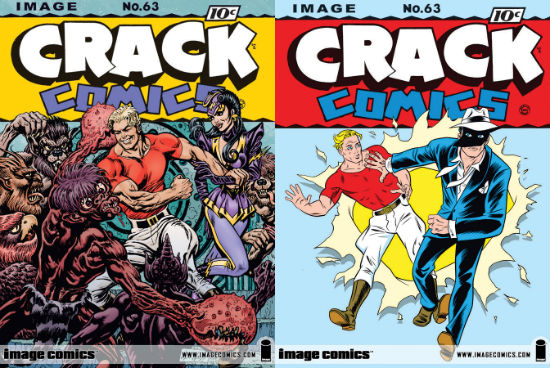 “The NEXT ISSUE PROJECT is for any fan of comics, not just fans of Golden Age books,” says editor Erik Larsen. “Often, the promise of Golden Age comics — where creators were making up the rules as they went along and were blazing new trails — was more exciting than the reality of Golden Age comics, where creators were essentially mimicking some of the same dull formulaic writing found in other mediums at the time. Everyone who contributed to CRACK COMICS #63 was intent on fulfilling the promise of the Golden Age and delivering a book that was more than a mere homage, but also a thrilling glimpse of what comics could be — if only creators were allowed to run wild with the characters they were handed! These creative dynamos jumped at the chance to present their own take on these Golden Age heroes and demonstrate comics’ true potential!”

NEXT ISSUE PROJECT: CRACK COMICS #63: Captain Triumph! The Clock! Spitfire! Molly the Model! Alias the Spider! Space Legion! Some of the greatest creations from yesterday are brought back to life by some of the greatest creators of today! Fans have marveled over the years as, one by one, characters from comics’ Golden Age have been revived for a modern audience. The NEXT ISSUE PROJECT is an ongoing series that continues a classic discontinued title for a modern audience! All stories are complete, self-contained and cool as all hell! All books are Golden Age sized, but these aren’t simply an homage to Golden Age comics: They’re updated classics by modern masters for a new generation!

2 thoughts on “THE NEXT GOLDEN AGE”