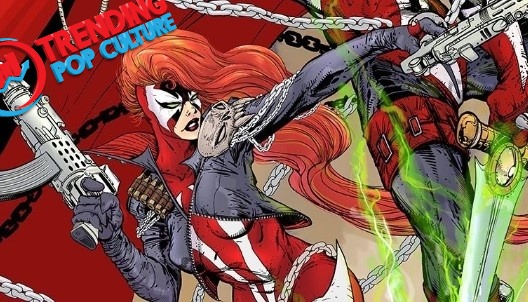 Spawn #302 – With the arrival of She-Spawn in issue #300, she’s become an instant hot commodity within the Spawn community. Todd McFarlane provides the Spawn and She-Spawn team-up cover. She-Spawn will indeed be a character to branch out on her own sooner rather than later. Look for a solo series in early 2020 and for her early appearances and covers like this one to be very sought after. The McFarlane/Capullo cover is absolutely gorgeous too.
Undiscovered Country #1 – Sold Out at the distributor level. From Image Comics, a new ongoing series from superstar writers Scott Snyder and Charles Soule. Daniele Orlandini and Giuseppe Camuncoli provide the pencils.
Spider-Man & Venom Double Trouble #1 – In the Marvel “What If?” vain comes this story. Spider-Man and Venom have their minds switched, now they have to team up to get theirs minds straight (excuse the pun). Written by Mariko Tamaki and drawn by Gurihiru.
Legion #1 – A new series from writer Brian Michael Bendis and artist Ryan Sook. Expect Brian Michael Bendis put put his signature on this series, as he does with everything he works on.
Fantastic Four #16 – Get to know the new character Sky and the connection to Human Torch. A key book for sure. Writer Dan Slott and artist Sean Izaakse.

Here are the rest of the trending comics and items headed your way this Wednesday from Trending Comics and More #602 (LOTS MORE there!)