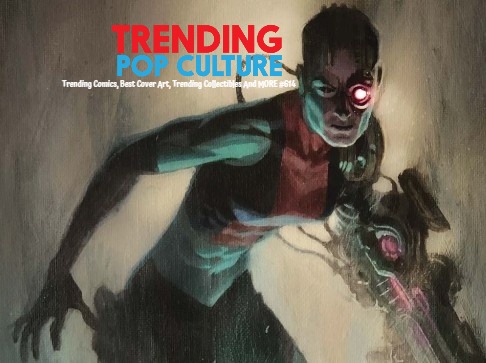 InvestComics/Trending Pop Culture; SINCE 2005.
Here are this week’s top Trending Comics, Cover Art, Trending Collectibles and MORE headed your way this Wednesday 2-12-20
Click on the RED links, Images or the comic cover to buy/bid from All available sellers on Ebay
Please note: New comic book releases and all items are subject to change

Batman Pennyworth RIP #1 – DC Comics, going ALL in on the death of Pennyworth. They want to ensure comic fans, yes, he is in fact dead and he ain’t coming back. DC wants to drive home this point so much, they’re releasing this book to promise Mr. Pennyworth is not going to miraculously come back to life anytime soon. A R.I.P. story that’ll celebrate the life of Alfred, a character that’s been with the DC family for 77 years and finally send him to the comic book graveyard. A respect move for the character and also to show the validity of his death. Writers Peter Tomasi and James Tynion IV along with artists Eber Ferreira and Eddy Barrows bring the upbeat/somber story to……life.
Gwen Stacy #1 – With the success of Spider-Gwen, the semi success of Ghost Spider and the large overall love, why did it take the human Gwen so long to receive her own monthly title? Well, no point it wondering, Wednesday’s release will follow Gwen in her early days, an origin type telling. See and read what Gwen was like before her untimely death. Writer Christos N. Gage and artist Todd Nauck.
The Flash #88 – The first appearance of Paradox. DC once before had a Paradox character back in the early 90’s, but this one seems to have nothing at all to do with that one. So, a first appearance. Creators Joshua Williamson and Jordi Tarragona.
Nebula #1 – We love reminding our regular readers and NEW readers about how amazingly awesome our previous venture was. InvestComics is the exemplary, superior, GOAT if you will of the comic book speculation hobby. So many have latched on over the years and have claimed to be able to register their idea of a “Hot Comic” and it’s quite laughable at times. A “Hot Comic” nowadays consists of creating needless banter about useless comics that are a moment in time and lack longevity. Batman’s junk, a “hot” television book, rumors, first appearance of Hydro-Man, you get the picture. InvestComics was the site that brought real comics to life, like from 2009, tipping off collectors about a comic from the 50 cent bins, Avengers #257. Nebula’s first appearance. This same article recommended Thanos’ first appearance for $200. Also in this article, Ultron’s first in Avengers #54 for $50 and the list goes on. But, all that said, we get back to the Nebula character. Not even a blip on anyone’s radar, but it was for InvestComics. This all happened 11 years ago. Time fly’s when you’re making the mark as the best ever. Now, after countless movie appearances, beloved by many fans, Nebula will debut in her own series. Creators Vita Ayala (writer) and Claire Roe (artist). And that Andrew Robinson cover (below in the Best Comic Covers section) looks so much like a Deathlok homage, no?

Symbiote Spider-Man Alien Reality #3 – The first appearance of Spider Supreme? Peter David and Greg Land.
Venom #23 – Marvel says this comic will plant seeds to the next Venom event….next year?? in 2021? That’s a while from now, no? What gives with that? Writer Donny Cates and artist Mark Bagley.
Harley Quinn & Poison Ivy #6 – DC Comics promises a shocking ending that includes an admittance from Poison Ivy. Writer Jody Houser and artists Mark Morales and Adriana Melo.
Superman Heroes #1 – Witness the affects of Clark Kent’s revealing he’s Superman to the entire DC Universe. Written and drawn some of the biggest talents in the industry.
Tartarus #1 – New Image Comics’ series from writer Johnnie Christmas and artist Jack Cole. Expect a quick sell out on this one.

Excalibur #7 – With the previous mention/rundown of today’s speculation market, this comic falls into the ridiculous mention category regarding the state of the market. The cover here depicts Gwen Stacy’s first appearance with the Excalibur sword! Yeah, this speculation market is a hot mess.
Spider-Man The Black Cat Strikes #2 – Continue a “new” look into Peter Parker’s um, side piece, Felicia, a.k.a. Black Cat.
Spirits Of Ghost Rider Mother Of Demons #1 – A new series starring a new character. From writer Ed Brisson and artist Roland Boschi.
Sonic The Hedgehog #25 – This 25th anniversary issue introduces a new character. Creators Ian Flynn and Adam Bryce Thomas.

The Flash Giant #3 – Three new stories accompany this 100 page giant issue. As always, there could be a first appearance or a controversial spot within these pages that cause the speculation to go ga-ga for a hot minute.
The Terrifics #25 – This anniversary issue lets the readers chose the ending. Gene Luen Yang and Dan Mora.
Alienated #1 – New Boom Studios book from writer Simon Spurrier and artist Christian Wildgoose.
Death To The Army Of Darkness #1 – New series from Dynamite. Creators Ryan Parrot and Jacob Edgar.
Napoleon Dynamite Valentine’s Day Special – From IDW, creators Megan Brown and Christine Larson.