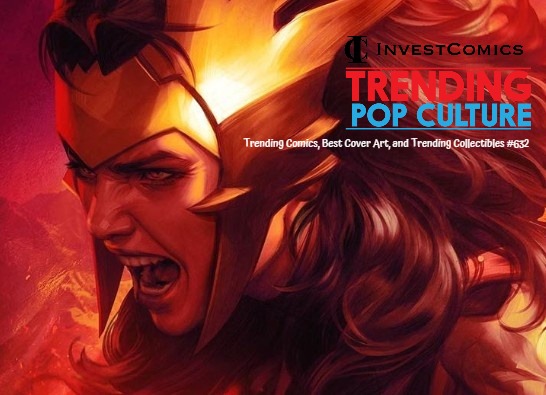 InvestComics/Trending Pop Culture; SINCE 2005.
Here are this week’s top Trending Comics and Best Cover Art headed your way this Wednesday 6-17-20
Click on the RED links, Images or the comic cover to buy/bid from All available sellers on Ebay
Please note: New comic book releases and all items are subject to change

Dark Nights Death Metal #1 – (from our Comics Not Arriving 5-13-20 post) Rumor has it that this series/storyline will be the “be all end all” for DC Comics. If the series is a success, DC Comics lives to see another day. If not, DC Comics goes bye-bye. AT&T will still own the rights to the characters, but it’ll be a different landscape without DC Comics on the shelf.
Wonder Woman Dead Earth #3 – DC on a “big secret” kick this week. Learn a shocking secret about Diana. Writer/artist, Daniel Warren Johnson.
Young Justice #15 – Revelations about Conner Kent. This issue also features the uniqueness of the characters within the story knowing their universe is being rebooted by DC. How does this work exactly? Only writers Brian Michael Bendis and David Walker will be able to pull this off in a Bendis type of way. Artist Jon Timms.
Flash Annual #3 –
Wynd #1 – With Boom Studios’ new television deal, speculators have gone ape-sh*t over their entire catalog. Extremely unnecessary, says InvestComics. Television series’ usually have a knack of falling out favor with fans and more importantly money spending studios/advertisers. InvestComics continues, Unless you’re a Walking Dead, in which a lot of specs made money, prices have come down significantly. Television never really sustains its value in comics. Some do, yes, most don’t. This all being said, speaking of Walking Dead, while the prices are almost as low as they’ll get for the time being, now is a good time to chip away at some of the key books. You’ll be able to flip them for more once the film arrives. Of course, this all depends if InvestComics doesn’t smarten up this wrecked modern market before then. Oh yes, Wynd #1, delivered by fan-favorite James Tynion IV and artist Michael Dialynas.

A Man Among Ye #1 – (from our Comics Not Arriving 5-13-20 post) New Image Comics series from Stephanie Phillips and Craig Cermak.
The Grievling #1 – (from our Comics Not Arriving 5-5-20 post) New series from Clover Press. Written by legend Steve Niles and art by Damien Worm.
Aquaman Giant #4 – These giant-size comics are awesome. Not so awesome is the silly speculation that makes some of these Walmart giant books something they are not.
Murder Hobo! Beaten, Broken,+ Buggered #1 – New from Scout Comics. Writer Joseph Schmalke and artist Jason Lynch. All Scout Comics are also available from their website.
Lady Zorro #1 – New from American Mythology. From creators Pat Shand and Mike Wolfer.