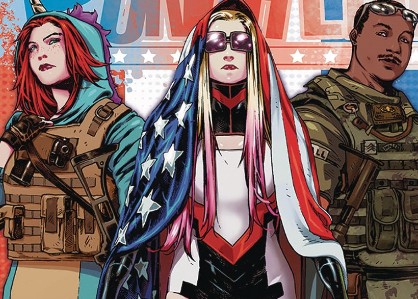 SINCE 2005. Here are this week’s top trending comic books and new items headed your way this Wednesday 6-26-19
Click on the RED links, Images or the comic cover to buy/bid from All available sellers on Ebay
Please note: New comic book releases and all items are subject to change

Avengers #20 – Daredevil the God Without Fear sets the tone for the future of the War Avengers team. Will fans see a solo War Avengers comic in the near future? That would be bad as*. Creators Jason Aaron and Ed McGuinness bring the story that’ll shape the future of the team.
Major X #6 – The full reveal of Major X happens here.
The Amazing Spider-Man #24 – All things lead to the next issue and it begins here with some big reveals according to Marvel. Stay close to this one. Spider-Man fans and collectors will scoop this issue up. Writer Nick Spencer and artist Ryan Ottley.
Wolverine: Exit Wounds #1 – New Wolverine stories from Chris Claremont alone will have comic fans excited. Larry Hama and Sam Kieth also join in on the new stories. This too will excite the masses. Yes, a good time to be a Wolverine fan.
The War Of The Realms #6 – This event book created quite the joy among readers. It all ends here though. Expect some big things coming out of this one, including a huge change for the Thor character. Jason Aaron and Russell Dauterman.

Action Comics #1012 – Brian Michael Bendis’ Leviathan event continues with new artist Szymon Kudranski.
Batman: Damned #3 – The conclusion to DC’d first Black Label imprint. Boy, did it start out with a dinger. Sorry not sorry. Writer Brian Azzarello and artist Lee Bermejo.
Spawn #298 – Ever since the announcement from Todd McFarlane came regarding Spawn #300 and the superstar creative teams he put together, comic fans have been super interested in following Spawn leading up to that landmark 300th issue. Artist Todd McFarlane will grace his now legendary Amazing Spider-Man covers from the 1988 era and convert them over to Spawn covers starting with his first Spider-Man issue in 1988, Amazing Spider-Man #298. The issue covers will coincide with each other leading to #300. Expect these covers/comics to trend in a big way until the dust settles and fanboys have their fill. Over inflated aftermarket prices will make more “expert comic speculators” poorer and maybe this will be the beginning of the end of the nonsense with every single modern age comic now becoming a “key issue”. Probably not, but losing money will not be a trend forever.
Punchline #8 – Trending Pop Culture first informed readers of this book and it’s upward trend back before issue number was released. Creators Bill Williams and Matthew Weldon then made it a habit of appearing on our site with every single new release Punchline came out with. This week, Punchline #8 delivers this special Matthew Weldon cover with three of the hottest Antarctic Press titles (characters) on it. Black Hops, Rags and Punchline. A well done, consistent comic month in and month out, coupled with a stellar variant cover will be a fan favorite here.

Samurai Grandpa #1 – This new Source Point Press comic from Eastin DeVerna (writer) and Shawn Daley (artist) is about to be sold out on the distributor level. A samurai grandpa, what is not to love here? And, and an Amazing Spider-Man #300 homage cover?!
Exciting Comics #3 – Antarctic Press. The boys make it back to another comic this week. Bill Williams and Matthew Weldon (of Punchline) bring us a cameo(?) of a new character they are brewing up; Mary Miracle.
Spider-Man Annual #1 – The focus of this comic will not be Spider-Man, but Spider-Ham. Writer Jason Latour, artists Jason Latour and David LaFuente.
Star Wars: Age Of Rebellion Darth Vader #1 – A new Darth Vader number one comic from writer Greg Pak and artist Marc Laming.
Black Panther #13 – A new story arc begins; Two Thousand Seasons. Writer Ta-Nehisi Coates and artist Daniel Acuna.