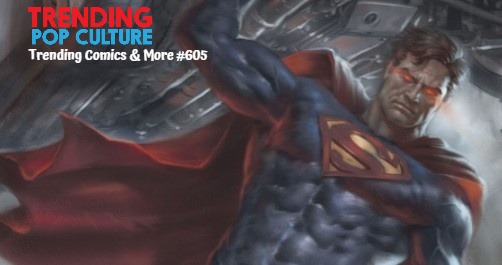 SINCE 2005. Here are this week’s top trending comic books and new items headed your way this Wednesday 11-27-19
Click on the RED links, Images or the comic cover to buy/bid from All available sellers on Ebay
Please note: New comic book releases and all items are subject to change

Action Comics #1017 – Writer Brian Michael Bendis teams with artist John Romita Jr. to bring a status quo changing story to the Superman character. DC Comics promises to keep their end of this hype up, but the comic fan needs to keep theirs and buy this comic. Sounds quite serious, comic fans should check this one out on Wednesday. It’s trending already with no word on what is inside of it.
Invisible Woman #5 – Speaking of characters changing in big ways, this comic changes Sue Richards forever. Could it do with that Adam Hughes cover with her holding a handgun? Mark Waid writes and Mattia De lulis illustrates.
Avengers #27 – Starbrand is the main focal point in this new storyline; Starbrand Reborn part one: Riot In Space Prison. Trending Pop Culture already spoke about the first appearance of this particular Starbrand character and his first appearance in Marvel Legacy #1 (2017). We also predicted a battle between Starbrand and the Hulk eventually. We’re looking forward to that someday. Check out the trending reintroduction of Starbrand into the Marvel U, starting here. Writer Jason Aaron and artist Ed McGuinness.
Venom #20 – It’s the final tie-in to Absolute Carnage. What a ride it has been from writer Donny Cates. Hats off to this gentleman. Marvel digs in and says it’s a must read book. Iban Coello provides the art. Also, with all of the crazy comic expert speculation going on these days, there are many 2099 covers accompanying the new releases. Some are actual first appearances. Is that a new Venom 2099 on the Khoi Pham variant? More 2099 covers to follow in this article….

Detective Comics #1016 – The first ever Ice Queen of Gotham is causing major issues for Bruce. Writer Peter J. Tomasi and artist Jamie Mendoza.
Ghost Spider #4 – The first appearance of Ghost Spider 2099 on the Bengal variant.
Punisher 2099 #1 – Yes, Marvel’s 2099 is back whether you want it to be or not. Marvel is all in. The latest Punisher title is written by Zac Thompson and Lonnie Nadler. Drawn by Matt Horak.
Scream: Curse Of Carnage #1 – Comic fans are treated to a new ongoing carnage series, not a mini, a maxi or a one shot, a new ongoing, monthly title. A very interesting character tries to find their way, its way, through New York. Writer Clay McLeod Chapman and artist Chris Mooneyham.
Conan 2099 #1 – The first(?) appearance of Conan 2099? Here begins a new Conan title from writer Gerry Duggan and artist Roge Antonio.