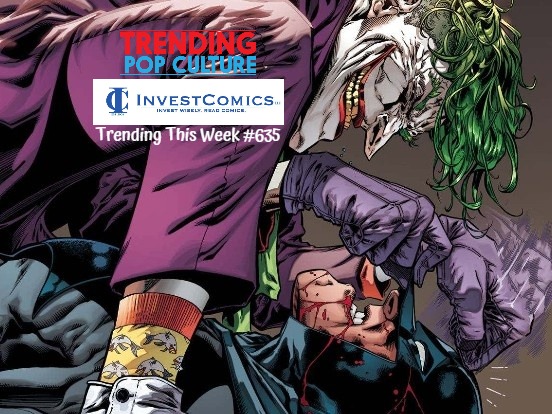 InvestComics/Trending Pop Culture; SINCE 2005.
Here are this week’s top Trending Comics and Best Cover Art headed your way this Wednesday 7-8-20
Click on the RED links, Images or the comic cover to buy/bid from All available sellers on Ebay
Please note: New comic book releases and all items are subject to change

Detective Comics #1023 – The Joker War continues and with cover art like this from Brad Walker and Andrew Hennessy, it will only perpetuate sales to a sold-out status quicker. Expect multiple printings of this comic. Peter J. Tomasi writes.
Strange Academy #2 – Fans of InvestComics know, this is one of the early picks from the InvestComics comeback. This before everyone picked up on it and touted it after we did. They all follow us and await the legitimate take on a speculation book. Strange Academy #1 is a very easy place to begin and here is issue number two (finally). Pick up these fantastic reads and eventual bigger picture books. Superstar creators, Skottie Young and Humberto Ramos.
Empyre #0 Fantastic Four – First appearance alert! Many fans have been crapping all over the Marvel Empyre books even though there are maybe one or two(?) books out. “They,” say it’s because at the center of the story is the character The Hulking and he’s not strong enough to carry a full event. Okay, that’s showing signs of positivity! Fans truly need to give things a chance to develop before crapping all over it. This comic release is a big one according to Marvel. Not just because they want to make a sale, but they claim a major first appearance from a new character named The Profiteer. Will this new character have longevity within the MU? That’s for the speculator to decide. Never have anyone make decisions for you on what is valuable. That’s called following, and not making your own decision. Dan Slott writes and R.B. Silva pencils.
Justice League Vol 4 #48 – First appearance alert! It looks as though a new villain may emerge. Check this comic out and see if this rings true. Writer Simon Spurrier and artist Xermanico.
Sacred Six #1 – This new series from Dynamite Entertainment is turning heads already. Artist Gabriel Ibarra makes his “mainstream debut” as Jae Lee contributes a stunning variant. Along with superstar writer Christopher Priest, look for this all-new 4 woman team to sell-out this Wednesday.

Batman #94 – The issue before Joker War takes over Batman for the next five issues. Spoiler……..this could be the end of the Batman/Catwoman relationship. An with a baby on the way too? Jeez.
Dceased Dead Planet #1 – Many stores are limiting one per customer on these books. Especially the pretty cover ones.
Oblivion Song #25 – At one time, some site used the word “optioned” and “Oblivion Song” in the same sentence and the speculation went upside down as it does quite often these days, only to come back down to planet earth a little bit later. These collectors have to wise up about this stuff. Too much money being thrown away. Oblivion Song is a great book and this week reaches its 25th issue. It’s almost sold out already, if not sold out completely by the time you get to the shop this Wednesday. This issue features a new story arc as well as an origin story. Writer Robert Kirkman and artist Annalisa Leoni.
Skylin #1 – New book from Source Point Press is just about sold out. Creators Fred Packard, Adam Cozart, and Josh Valliere.
Everglade Angels #1 – From Scout Comics, another sold-out indie book. Creators Blake Northcott, Roc Upchurch, and Scott Lobdell.

Spider-Man Poster Book – Who doesn’t like a cool ass poster? Here’s a whole book dedicated to awesome Spidey posters from the world of the amazing video game. That game is fun, have you tried it?
Buffy The Vampire Slayer Willow #1 – From Boom Studios, Willow gets her own title. Writer Mariko Tamaki and artist Natacha Bustos.
Monster Men Heart Of Wrath #1 – From American Mythology, creators Mike Wolfer and Roy Allen Martinez.
First Defense #1 – Red Giant Entertainment killed it last week with a whole bunch of new releases. Here’s a new one this week via Absolute Comics Group from writer’s Chris Crosby and Mike Rosenzweig. Art by Tina Francisco.
Loggerhead Bloody Bayou #1 – Another Scout Comics one-shot from writer/artist Bryan Silverbax.