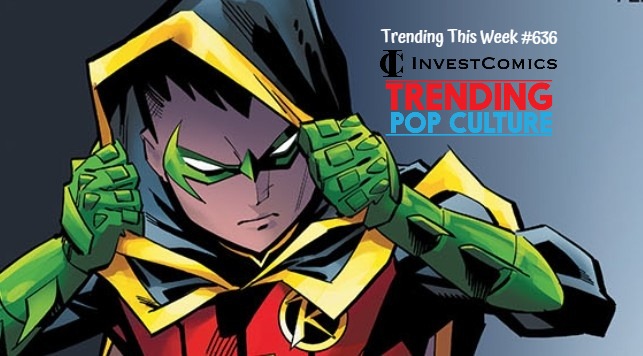 InvestComics/Trending Pop Culture; SINCE 2005.
Here are this week’s top Trending Comics and Best Cover Art headed your way this Wednesday 7-15-20
Click on the RED links, Images or the comic cover to buy/bid from All available sellers on Ebay
Please note: New comic book releases and all items are subject to change

Dark Nights Death Metal #2 – It was recently announced that a new character will grace the cover of Dark Nights Death Metal #3. His name is Robin King. Not making that up. He does look quite badass though, but that name leaves a lot to be desired. So naturally, the big question IS………will Robin King appear in the prior issue or will his first appearance be on the cover of the third issue? Writer Scott Snyder to the rescue! Mr. Snyder tweeted that Robin King will appear in THIS issue. Let the bs cameo/first appearance debate begin!
Venom #26 – Speaking of cameo and first appearance, here is the first FULL(?) appearance of Virus. Did he even appear in the previous issue? If he did, and it was a “cameo”, this is his first FULL. If he didn’t, then ignore all this stupid shit and recognize this comic as the first appearance. See how easy that is? Written by Donny Cates and art by Iban Coello.
Nightwing #72 – Remember all that Punchline craze right before the pandemic came through and stopped everything for a while? Do speculators/collectors still care about this new character? Anyway, Punchline appears in this one to fight Nightwing. Speculators, an early appearance to pick up and savior with the hopes from most that she becomes an A-lister like Harley Quinn. Good luck with that. Make that bread though with the ones that keep thinking it.
Snake Eyes Deadgame #1 – A new Snake Eyes origin type series from writer/artist Rob Liefeld. The new IDW series debuts with 36 variant covers. Yes, that’s 36, not a typo. Pick from a variety of covers from many of the industry’s top creators. Writer Chad Bowers co-writes with Liefeld. Let’s all hope the inside of this comic is as good as some of these 36 covers.
Teenage Mutant Ninja Turtles #106 – A new villain/monster debuts. Not sure if this will be cameo crap or first appearance stuff. Creators Sophie Campbell and Nelson Daniel.

Empyre #1 – A new villain was introduced in the Fantastic Four Empyre issue last week. Maybe they show up here too? Look for more first appearances throughout the event. Many times these big stories drop in a new character without giving anyone a heads up.
Savage Dragon #250 – Creator of Savage Dragon, Erik Larsen, gets his project to the 250th issue. He stated on his Facebook feed that his 250 issues are REAL as compared to Todd reaching 300 with Spawn because “I did all my issues.” Okay, that’s a fair assessment. The 250th celebration issue comes with a bunch of variants from various artists. Including Todd.
Catwoman #23 – Do speculators today collect first works from creators anymore? It used to be a thing back in the day. Anyway, here is the DC Comics debut of writer Blake Northcott. Art from Sean Murphy.
Fantastic Four #21 – An Empyre tie-in from Dan Slott and Paco Medina.
Spider-Woman #2 – Spider-Woman finds out why she’s (*cue music) Down With The Sickness. Maybe it’s a new virus/symbiote thing? Who knows? Writer Karla Pacheco and artist Pere Perez.